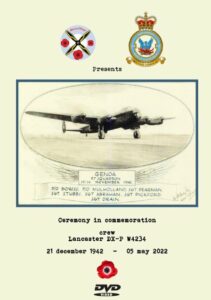 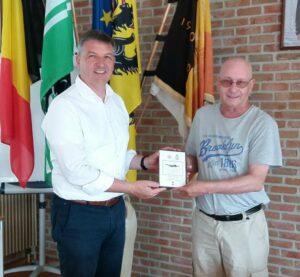 lyde. On May 4, 2022, History Wings, in collaboration with the municipality of Lierde, organized a commemoration on the occasion of the eightieth anniversary of the crash of a Lancaster bomber that crashed in the Kakebe district in 1942, killing 6 of the 7 crew members. In addition to family members of the fallen, military representatives of the Royal Air Force, Ministry of Defence, Ambassadors and Consul of the Embassies of the UK, Australia and New Zealand were present at this commemoration.

It was historically the first time after the Second World War, and also for the last time, that a Lancaster bomber flew over Lierde again and saluted the fallen and flew over the field where the crash happened. As this was an exceptional commemoration, the organizers of the commemoration at the monument, the overflights of the Lancaster and the evocation in OC De Lier decided to make a 2-hour video documentary that they have now released on DVD.

The family members who saw a first version were delighted with the way everything was portrayed, because in addition to the recordings of the commemoration, there was also a unique evocation and sound recording in the video processed by Lugy Video Productions. For example, a first copy was presented today by Dirk de Quick of History Wings to Mayor Jurgen Soetens, who received the DVD on behalf of the municipality of Lierde.

If you would also like a copy of this DVD of this historical event for Lierde, you can always send an email for info with name and address to [email protected].
The DVD costs 15 euros. For residents of Lierden, it is delivered free of charge at home. Outside Lierde there is an additional 7 euro shipping costs.

Grotenberge party this weekend with New Year’s reception in a summery jacket + funfair!

Grotenberge party this weekend with New Year's reception in a summery jacket + funfair!