Geraardsbergen/Bever. At the World Duathlon Championships in Targu Mures in Romania, Maurine Ricour (30) and Arnaud Dely took the win in the first mixed relay ever at a Duathlon World Cup. Maurine finished in sixth place in the individual athletes. The Beverse athlete is semi-professional and has been training in Geraardsbergen for years. In recent years she sports a nice palmares. A conversation arises.

Maurine Ricour and Arnaud Dely captured gold in Romania. They each completed a 1.6 km run, a 5.4 km bike ride and a further 800 m run in 1h12’20”. With that, both duathletes finished 6 seconds ahead of the Italian and 8 seconds ahead of the French team. However, the southern neighbors had the brand new world champion men’s duathlon Krilan Le Bihan in their ranks.

Race course
Maurine finished in sixth place in the individual athletes. The Beverse athlete is very satisfied with this sixth place. ‘It is the first time that I participated in a World Cup. I am therefore especially happy that I was able to experience the match.’ The duathlete mainly rode her own race. ‘I didn’t want to blow myself up by being with the first group. The second group also included some strong cyclists. ‘After the switch it took 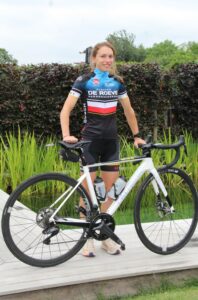 not long before we got to the front.’

It went well on the bike. Maurine was able to prick himself a few times by going on the attack. While walking, she had to slow down a bit. “There was no point in following the strong runners. I dosed my powers.’ Maurine Ricour finished sixth at 54 seconds behind Venezuelan Joselyn Brea.

The Beverse is not ready for her test piece. Last year she made the most of the second round of Lotto Duathlon Series in Ypres. She was also the best at the test event duathlon of Triathlon Flanders in Willebroek. She won bronze at the Belgian Championship 10 km on the road in Lokeren. At the beginning of this year, she wrote a cross-country victory for the first time on her record. In 2019 she took silver in the BK marathon in Eindhoven and finished second in the BK duathlon. Two years ago, she also took part in the European Championship, where she finished seventh.

Professionalization
Maurine didn’t start competing until she was twenty. After a few detours she ended up in the duathlon. The duathlete may live in Bever, but she has been training for years at Atletiekclub Geraardsbergen (ACG). She soon noticed that walking and cycling suited her very well. Initially she committed herself to triathlon, but due to the poorer swimming performance she automatically rolled into duathlon. Maurine professionalized her approach and it paid off. She also participated in more competitions and came into contact with national team coach Loïc Hélin. Maurine was picked up for the World Cup.

De Beverse started in the triathlon, but swimming is not her forte, so she switched to the duathlon. ‘If you want to count in the triathlon, you have to be with the leading group when swimming, otherwise the gap will become unbridgeable’, Maurine testifies.
The distances in the competitions vary. ‘As far as the world games are concerned, there will be a 10 km run, a 40 km bike ride and finally a further 5 km run.’ The distances are relatively short, but it is progressing very well. ‘It is then extremely important that you are with the first group from the start, otherwise it will be difficult.’

Walking and cycling seem like a difficult combination, but for Maurine that is no problem. “It’s a matter of sufficient training.” The duathlete does not have a preference. ‘My strongest side is the combination of cycling and walking. I take the transition from cycling to walking and vice versa smoothly.’

Maurine also trains and competes in France. “The competitions there are of a very high level,” she testifies. But that didn’t stop her from being on stage a few times.

world games
From next year, the Beverse athlete will focus on the longer distances. ‘Longer distances suit me much better.’ Maurine sees herself still growing, especially in terms of speed and explosiveness. That requires a lot of training. ‘At the moment I am in a very busy period. I train twice a day, walking and cycling. Now I work on endurance for two weeks, but two weeks before a competition I concentrate on the intensity.’ For cycling, Maurine is accompanied by her friend Wazo De Rouck.

The level of duathlon among the men is high, among the women it is less. According to Maurine Ricour, this is due to the fact that many women switch to triathlon or cycling. ‘That is mainly due to the fact that there are few competitions in Belgium and that the sport is therefore less known to the general public. Triathlon is much better known and there are a lot of good triathletes.’

However, we should not despair, says Maurine. ‘The duathlon competition in Halle is very well organized every year. It is also a tough match and worthy of the Championship.’ Internationally, the duathlon is much more highly regarded. “When I participate in competitions in France, I notice that the level is much higher.” The duathlon is very popular in France, Spain and Italy. ‘The duathlon could get a little more media attention in Belgium. It will benefit the sport.’ According to Maurine, there is enough talent in and around Geraardsbergen for the duathlon. ‘By putting the sport in the spotlight, perhaps more athletes would be convinced to choose the sport.’ 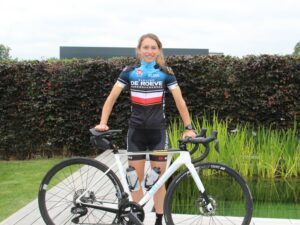 Maurine does not have a contract with Sport Vlaanderen. She sports semi-professionally. That means she still has 4/5 to work. “It’s not easy, but it’s doable,” she says. ‘It would of course be nicer if I could work full-time professionally, but that’s not an option.’
Within three weeks, Maurine will leave for Birmingham in the United States for the world games. The BIOC then ensures that the duathlon is put in the spotlight and can count on some interest in the media.

No social media
Anyone who wants to encourage Maurine will not be able to do so via social media. ‘A conscious choice’, she says. ‘In the past I did communicate via social media and I mainly experienced the negative influence. I prefer to put my energy into training and competitions.’

Melle: Groen wants clear information and real participation for the people of Mellen in the merger plans

Melle: Groen wants clear information and real participation for the people of Mellen in the merger plans