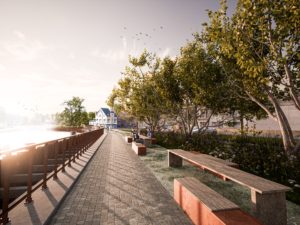 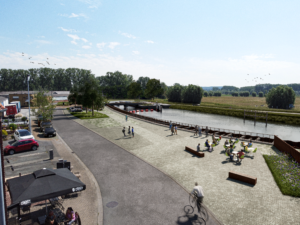 same. Wednesday afternoon, June 22, there was a well-attended information market in the Die Crone hall about the renovation of the lock and the weir and the redevelopment of the square on Ankerstraat. The island will be excavated a bit. If the permits are delivered on time, work will start in the summer of 2023 and will be completed in 2025. Ships Kristin Vangeyte (Open Vld) and ships Veerle Mertens (CD&V) were also present. The works are not limited to Idegem. In the initial phase, however, the focus is on the replacement of five upward weirs between Geraardsbergen and Aalst by modern ones. 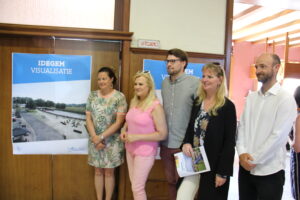 To guarantee water protection and to keep the Dender navigable, six of the eight weirs on the Flemish Territory are being renovated. The Idegem weir is also being renovated. In addition, the entire square at the weir and the lock will be redesigned. The square will also be a lot bigger and will be provided with a lot of greenery. The island will be partially excavated to rebuild the weir. The boat will no longer be able to moor in Idegem.

The works
The project includes the renovation of the weir, the construction of an associated technical room and the elimination of a fish migration bottleneck by building a fish ladder or a fish side channel. The current weir in Idegem was built at the end of the eighteenth century and is very outdated. She still works with shot beams. Wooden beams are lifted in and out of the current with a hoist. The bulkhead beams are replaced by weir valves. The can be operated automatically and provide more accurate, safer operation.

The difference in height between the water on both sides of the lock is called the lock height or drop. The lock of Idegem has a drop of 2.3m.

‘After the design, the preparation of the environmental impact report and the application for the necessary permits will start. The adjustments to the weir, the construction of the technical building and the construction of a fish pass are planned for 2023. Two years later, the new weir is operational’, says Thomas De Wannemaeker, project engineer at De Vlaamse Waterweg nv. 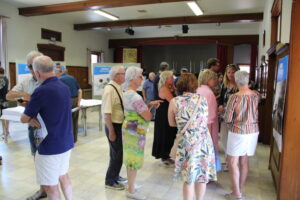 The new weir in Idegem will be located on the current island, next to the existing lock. The doors of the lock will be replaced by fully automatic ones. A new service building will be built next to the weir, which will accommodate the technical areas of the weir lock complex. There will be a fish pass. A new fixed bridge is also planned. The bridge will be widened for the safety of cyclists and pedestrians. A new drawbridge is being built as an extension of the fixed bridge. The existing space next to Ankerstraat will be considerably enlarged and redesigned as a multifunctional space.

Progress of the works
The environmental permit will be applied for in the spring of 2023. If the necessary permits are obtained in time, work will start in the summer of 2023. At the end of 2024, the existing bridges will be demolished and a new one built. ‘As long as safety allows, the existing bridges will remain open. As soon as the bridges are demolished, a temporary bicycle and pedestrian bridge will be provided and motorized traffic will be diverted’, Thomas De Wannemaeker concludes. Due to the replacement of the lock doors, there will be no traffic on the Dender at the Idegem interchange for a while. “The disruption will be limited. These works will proceed quickly’, reassures the project engineer of De Vlaamse Waterweg nv.

The weirs and locks on the Dender will all be operated remotely from one central post. ‘The brand new service building in Aalst is thus evolving into the epicenter of water management and shipping on the Dender.’

‘The studies and works already carried out and prepared up to and including 2020 will cost €47 million. With a view to the further timing and objectives of the barrage programme, De Vlaamse Waterweg nv provides an additional budget of approximately €27 million. This also includes an extra package of flood-limiting measures, such as raising dikes and flood defenses and deepening and widening the waterway’, says Thomas De Wannemaeker. 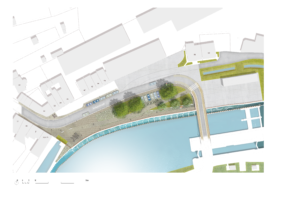 City is looking for translators/interpreters Ukrainian/Russian

City is looking for translators/interpreters Ukrainian/Russian