Geraardsbergen resident Christophe Byl is highly praised for his astonishing fireworks spectacles. This is also the case at the fair in Oosterzele. What a wonderful fireworks display at Sinksenkermis. The village was packed to the brim. The spectators experienced a stunning fireworks display. The fireworks remain a fixed value of the fair and are really indispensable. No fair, without fireworks. The fireworks are already on the program on a funfair poster from 1933. We suspect that fireworks were also set off years before that. Does anyone know more about this? Let us know. The fireworks remain one of the highlights of the Sinksenkermis, a real crowd puller. A few comments. ‘In one word superb’. ‘An overwhelming spectacle’. ‘Beautiful’. ‘Punishment’. ‘Contemporary’. ‘Fantastic’. ‘Surprisingly beautiful’. We were curious about the fireworks maker, who succeeded the Vangelabbeek brothers. We would like to introduce you the ‘master of firework’ Christophe Byl from Geraardsbergen. 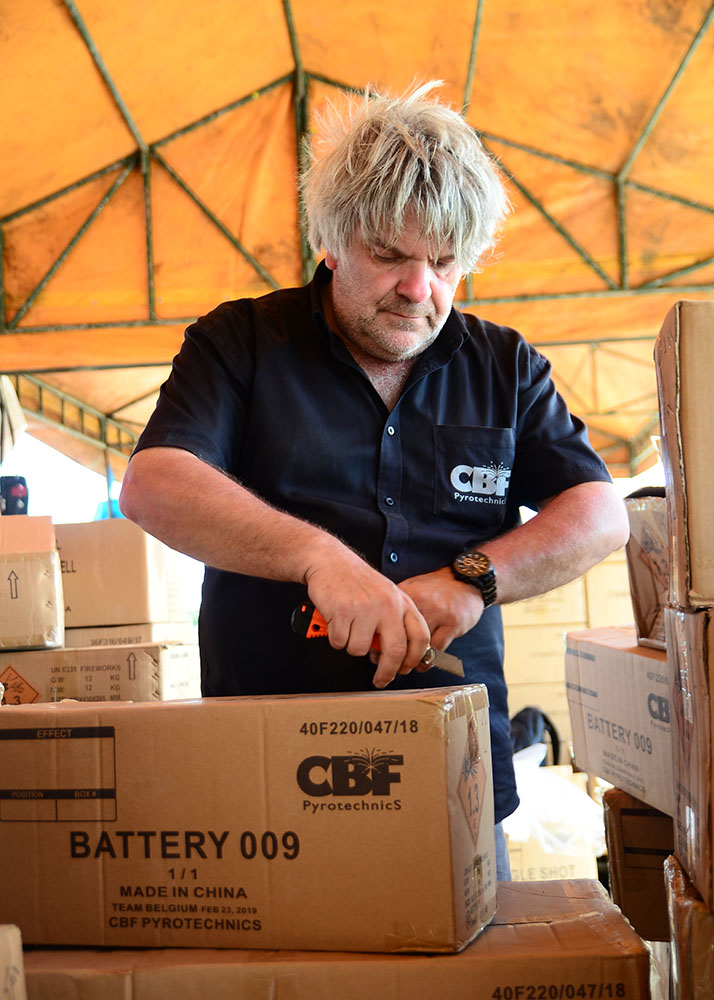 The company of Christophe Byl from Geraardsbergen enjoys an (inter)national reputation for its original, artistic and ultramodern fireworks. Since 1995, Christophe Byl’s life has changed. He founded CBF Pyrotechnics and became active at home and abroad. He turned his passion for fireworks into his profession. His compelling work ethic characterizes him. Christophe creates enormous dynamics in his company. He continues to conjure plans out of his hat. He quickly set out the lines in his company to the goal he intended and he himself knows exactly where he wants to end up.

He is happiest when he can create. A creative mind, his calling card. He does ‘fireworks’ in a new way. Characteristic are daring, work power, inexhaustible energy, driven, energy radiating from every pore of his body, a dynamo incarnate. As founder of CBF Pyrotechnics, he quickly put himself on the international map. 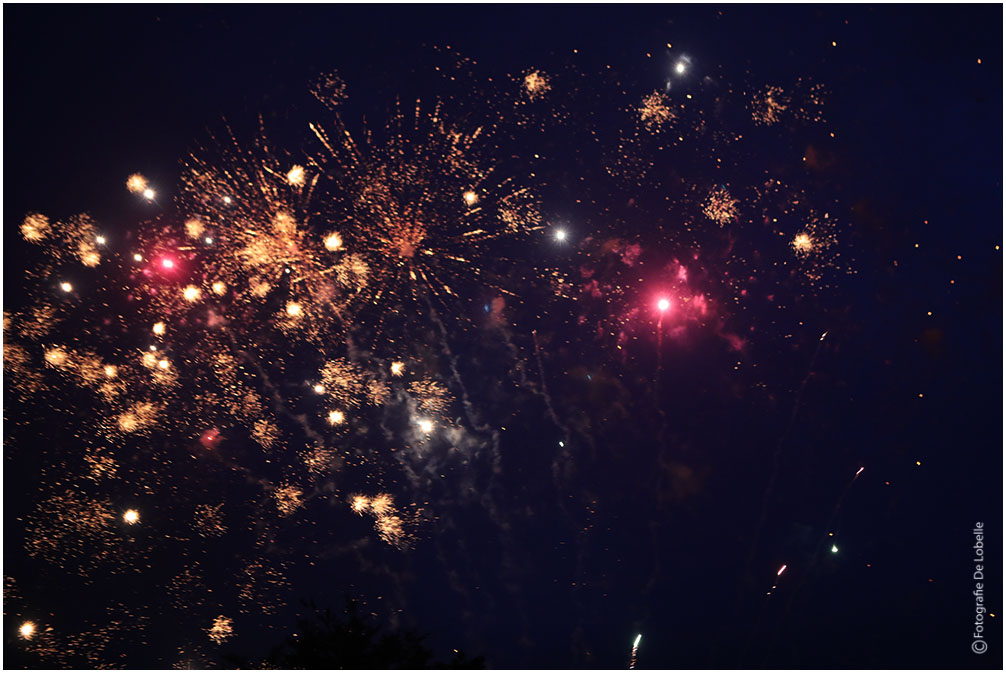 The successes at home and abroad are piling up. CBF Pyrotechnics is his life’s work. His fireworks company is three times Belgian champion. To top it off, he won gold at the 13th International Fireworks Festival and at the Jinshan Beach Fireworks Festival in Shanghai. He sets up masterly, masterly fireworks – not only in the Netherlands – but also in Taiwan, Japan, Philippines, Canada,… The jury fell for his ‘new look’ and ultramodern fireworks. Performances to say the least, at these festivals the international top of fireworks makers really come together. A great honour, only three Western fireworks makers are allowed to participate. Winning gold in the chauvinistic and fireworks country of the world China proves that Christophe Byl is an authority in the ‘fireworks world’. Extremely proud of the recognition, when a Discovery Channel reporting crew descends on Geraardsbergen (Overboelare). With the most modern techniques (works completely electronically) he makes a success of every fireworks. The public is always presented with a literally and figuratively beautiful and dazzling fireworks. Never say fireworks to fireworks again. The public who admire Christophe Byl’s fireworks spectacle will agree. The high expectations of the spectators are always fulfilled. The fireworks maker from Geraardsbergen puts on masterful fireworks shows. There is something passionate about the fireworks, they are bright, they are overwhelming and they have enchanting powers. Fireworks as a pure art form. The hand of a craftsman. Christophe Byl: a healthy work ethic and a continuous drive to keep perfecting. The properties that ensure that craftsmanship becomes mastery. 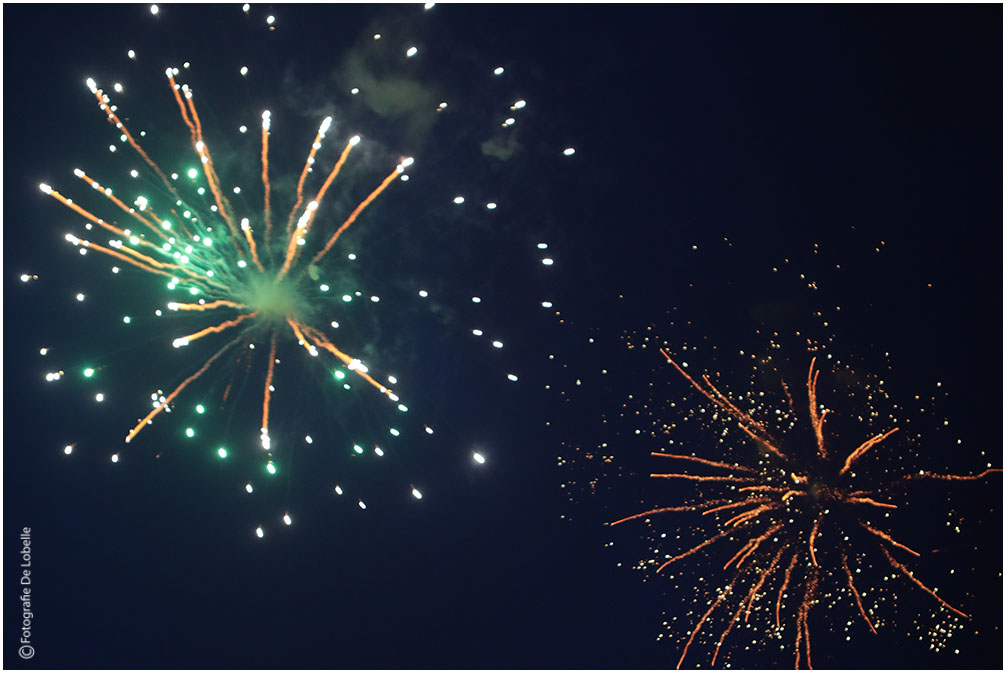 As chairman of the Belgian Fireworks Federation BelPyro vzw, he was not pleased with the proposal for a decree (2019) of the Flemish Parliament that bans the lighting of fireworks in Flanders. He defends the interests of the fireworks makers like a lion. Concerned about colleagues. There must be some colère in a creative person, dissatisfaction. What? Do you think you can harm the fireworks sector just like that? That is the anger, the holy fire. Don’t make peace with decisions that are absurd. Glad he can still indulge in fireworks, sometimes it’s hard fighting. If he does a fireworks show, he remembers. It’s the magic. The appreciation is a blessing to make new fireworks again. It takes a lot of effort and sweat. He can no longer live without fireworks. Fireworks help, fireworks heal, fireworks keep him young. Take his work away from him, he is no longer alive. Work and fireworks, that flow together. He may be a workaholic, but in any case he can no longer imagine life without fireworks. If he does nothing, he is only a shadow of himself. His work, that is his life, his energy, his time. Energy that becomes visible. That’s what it’s about. The audience enjoying Christophe Byl’s fireworks, that’s the essence. The artistic blood still flows through his veins after 27 years.

Brakel the center of Belgium