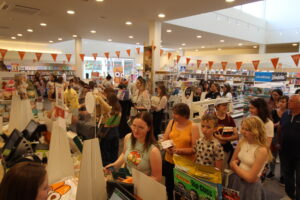 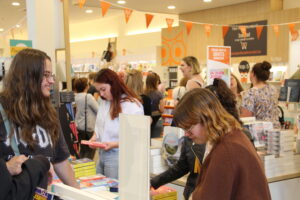 Geraardsbergen. Saturday afternoon it was drumming in De Standaard Boekhandel. You could enjoy the second edition of the BoekTok event all afternoon. Piles of BoekTok favorites and new titles were served there. Doreen Hendrikx signed her debut novel ‘Zout’ and there was also a panel discussion with influencers. The youth attended en masse and mainly bought piles of English books that were recommended via TikTok. ‘The prejudice that young people no longer read is refuted here’, testifies Ellen (16).

Saturday afternoon, July 2, it was all over in the Standaard Boekhandel in Geraardsbergen. Kimberly Mathieu (21) and Yasmine van den Meersch (24) organized the second edition of BoekTok. Piles of BoekTok favorites and new titles were served to the many enthusiastic young people who showed up. Social media was used to mobilize the young people to the Standaard Boekhandel. It became a great success. The young bookworms threw themselves on well-stocked bookshelves in throngs. It is striking that it was mainly girls who bought the necessary reading material for the holidays. Mostly English-language books were sold. ‘Dutch translations are more expensive and we prefer to read the book in the original language’, says Femke (17). ‘It is not always easy to read, but in the meantime we are improving our English.’

TikTok
On TikTok, young readers share reviews and book recommendations using the hashtag #BookTok. The hashtag, which is also gaining popularity in Belgium and the Netherlands under the name #BoekTok, has already been viewed almost 20 billion times. From breathtaking fantasy books to nail-biting thrillers. At the Standaard Boekhandel you will find a wide range of books that are recommended on TikTok. Three influencers were recruited to promote youth literature via TikTok. Dilera (20) – good for 160,000 followers – praises both English and Dutch literature. Femke (24) from Antwerp has only been active on TikTok for a year and already has 12,800 followers. And then there is Lotte (21) who, with her 1700 followers, also tries to sell children’s books.

Doreen Hendrickx
The young debut writer Doreen Hendrikx (23) was also present to sign her book ‘Zout’ – published by Pelckmans. Maud – the main character – is seventeen and struggles with why it is so easy to love Claire Hale. One day she is challenged by her best friend to share her love for food on Instagram. Then she sees for herself why it is so easy to love Claire Hale. She loses herself in social media, with all the consequences that entails. With her debut novel, Doreen warns against the harmful consequences that social media can have if used incorrectly. ‘You have to be aware of the dangers of social media’, says Doreen.

Doreen is just graduating with a bachelor’s degree in commercial engineering and policy informatics. She is from Neerpelt and studied in Antwerp. She will soon be able to work as a journalist for the newspaper De Standaard. She has also practiced judo for a long time. ‘That demands a lot from a human body. In that way I also learned how young people deal with their bodies.’ Meanwhile, a second book is in the pipeline. ‘I can’t say much about it yet. It remains a surprise.’ Doreen isn’t finished yet. ‘1001 ideas are still waiting to be worked out.’

Reepstraat partly closed due to work

Reepstraat partly closed due to work