Werner De Nooze went on foot to Compostela, an epic journey of 2370 km 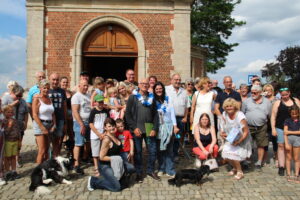 Geraardsbergen. Werner De Nooze (60) went on a pilgrimage to Santiago de Compostela on foot, an epic journey of 2370 km. He made the journey alone. Along the way he met other pilgrims who accompanied him on his journey. He left the chapel of the Oudenberg on May 1, 2022 at 9:00 am and arrived at the Cathedral of Santiago de Compostela on July 1. On July 4, he was welcomed by family and friends at the Oudenberg and put in the spotlight. My father inspired me to complete this hellish journey,” admits the courageous pilgrim. 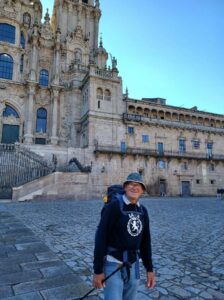 all of Europe end their walking or cycling trips here. Werner De Nooze started his heroic journey on 1 May at 9.00 am at the chapel of the Oudenberg. On 8 May he was already in Paris. Three weeks later, Werner passed through Bordeaux. Around June 7, our pilgrim was in the Spanish Basque Country. Three days later he crossed Pamplona. Eleven days later, he was standing in front of Burgos Cathedral. On July 1, Werner De Nooze was in front of the cathedral of Santiago de Compostela with about 2370 km on the clock. His travel report is extensively documented on his Facebook account.

An epic undertaking
‘It was a real ordeal’, Werner De Nooze describes his epic undertaking. ‘It was very tough mentally, physically and financially.’ Sometimes he had to walk tens of kilometers before he could eat or drink. ‘Sometimes I ended up in a village in the northwest of Spain and there was no place to sleep. There was no other option then to continue to the next village in the hope that I would find shelter there.’ Several times his heart sank and he thought back to his home situation with nostalgia.

It was therefore a huge relief that he reached the Spanish pilgrimage site after two grueling months. “I’ve dreamed of taking on this huge challenge for a long time. I am therefore very happy and proud that I have succeeded in this epic undertaking’, Werner admits with emotion.

In the footsteps of his father
What possesses a man to embark on such an adventure? Several years ago, Werner became very ill. He could barely walk. ‘I then said several times: ‘If I recover from this disease, I will go on foot to Compostela,’ reveals The Courageous Pilgrim. ‘Like my father, I am a man of my word. I stood my ground and kept my promise.’

For Werner, his father was his great example. ‘I left the chapel on the Oudenberg because my father attached great importance to this environment’, Werner explains. ‘My father inspired me to complete this hellish journey. He was a man of his word and a go-getter. With this achievement I am proudly following in his footsteps.’

Werner is well surrounded by family and friends. ‘There is no longer such a journey. When you’re away from home that long, you realize what you’re missing.’