No more squat for Marina… 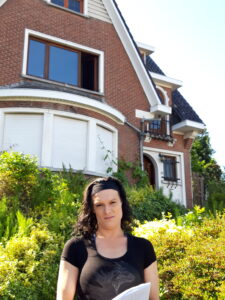 Geraardsbergen. Marina Janssens Rodriguez was forced to live illegally for a few weeks in an abandoned building at 92 Astridlaan. Marina was looking for a home and the OCMW did not immediately have a solution. So she moved into an empty house and camped there for quite some time. In the meantime, she has let it be known that she is doing much better. She has found a studio together with her dog. ‘We feel a lot better. The OCMW is really helping us now’, says Marina.

Marina has been forced to squat a building on the Astridlaan for more than two weeks.

Munte, Luc Eeckhout is king of the cutting horse carders for a year

OCMW Lierde receives a donation of 1,140 euros from Classica Pollentia

OCMW Lierde receives a donation of 1,140 euros from Classica Pollentia