Impediment to demolition of Markt building causes dissatisfaction. Solution not yet in sight. 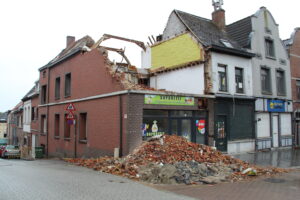 Geraardsbergen. Following the demolition of a house on the corner of Markt and Buizemontstraat, the works were halted because there was a danger of collapse at an adjacent house. As a result, the Market on the corner of Buizemontstraat has been closed since the end of April. This causes a lot of annoyance among the local residents. Councilor Stéphan Bourlau (The Alternative) insists on a quick solution.

The Buizemontstraat between the Markt and the Molenstraat has been closed for three months. The reason is the demolition of a house on the corner of the Markt and the Buizemontstraat. A demolition permit was issued, but during the demolition work the adjacent house in Buizemontstraat threatened to collapse. That is why the works have been stopped until the procedure between the two involved will bring clarity. In the meantime, the owner of the house pays €100 per day to close the street. While the annoyance among local residents grows, the whole issue drags on and there is no solution in sight.

Decisive action
In the meantime, all traffic from the center currently runs via the Molenstraat, which causes resentment among the residents. The hairdresser in the Buizemontstraat also shares in the blow.

The temporary traffic regulations for the closure of the Buizemontstraat between the Markt and the Molenstraat normally ended on June 27, but the situation has not changed so far. “Mayor De Padt hopes for a quick solution, but was unable to answer concretely during the city council when the works can be continued,” said councilor Stéphan Bourlau. The foreman of Het Alternatief urged the mayor to ‘act quickly and decisively’.

“First and foremost, the safety of local residents is at stake. Despite the fact that the building is closed, there is a mountain of rubble in front of the house and stones threaten to come loose. In addition, it is of course not visible. A solution must be found as soon as possible. It would be an act of good governance,” explains Stéphan Bourlau. ‘The discussion between two private individuals takes precedence over the public interest. This is a wrong signal. Moreover, this entire dispute is at the expense of the smooth use of the public domain.’

Risky business
Mayor De Padt (Open Vld) is also very bored with the issue. ‘I am also dissatisfied with the state of affairs, but as mayor I am of course responsible for safety in the public domain.’ An environmental permit and a demolition permit were issued for the building on the corner of Markt and Buizemontstraat. ‘The demolition of the house has started, while we are of the opinion that the stability file is insufficient. When it was established that the demolition threatened another house with the risk of collapse, the demolition was halted’, mayor Guido De Padt explained at the request of Stéphan Bourlau. Mayor De Padt is powerless: ‘It concerns private disputes that I do not have to deal with in the first instance.’

Mayor De Padt did not sit back and sat down with those involved to find out whether action could be taken to find a solution. ‘Agreements have been made with the parties involved. It is currently being checked whether these agreements are being complied with. If that’s not the case, I’ll see if the city can take the place of the owner who ordered the demolition work.’ That will of course take time. Mayor De Padt realizes that it will be quite a job: ‘That is easier said than done because it concerns a risky business.’

Government disclosure
There is a mist of ambiguity surrounding this entire file. When the environmental permits are announced on the website of the city of Geraardsbergen, the file is no longer available for inspection. The environmental permit was granted at the end of April, while the announcements are only available for inspection from 23 May. Applications from before May 23 can no longer be viewed. This certainly does not benefit the principle of ‘public administration’.

It would certainly be interesting to find out under what conditions the demolition permit was granted. If the stability file was inadequate – as mayor De Padt claims – then the preliminary investigation may not have been carried out with the necessary care.

Car ends up tilted on the bike path

Car ends up tilted on the bike path