Demolition of the houses is not yet in sight. Gentsestraat will remain closed. 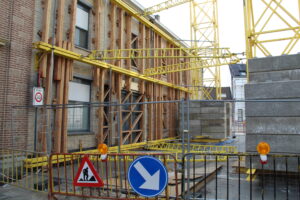 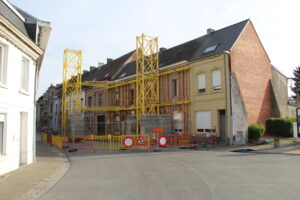 Geraardsbergen. After a subsidence in the Gentsestraat, three houses became unstable. They must therefore be broken down. But the demolition has been delayed for months, which means that Gentsestraat remains inaccessible for through car traffic. At the end of April, the city council considered the necessary legal action to speed up the demolition, but more than two months later, the situation has not changed. Mayor De Padt is looking for a way out to find a solution.

Gentsestraat has been closed to through traffic for more than three months. It remains to be seen until when work is finally done on the demolition of the houses. The city wanted to urge the contractor to be more urgent by means of summary proceedings. In vain. The discussion between insurers and experts continues to drag on. “On that basis, you cannot continue to hold a part of the city hostage,” remarked mayor Guido De Padt during the city council on Tuesday 5 July.

City asks for compensation
Mayor De Padt realizes that this is a complex file, ‘but you should not ignore the public interest as a result’. The mayor has approached Ethias to appoint a law firm to investigate what the city can do with regard to the damage caused by the closing of Gentsestraat. ‘The discussion between private persons must not be at the expense of the public interest,’ added Guido De Padt during the city council. It is not immediately clear how this compensation can be given shape.

On Saturday, March 26, a subsidence was established in Gentsestraat due to flooding water. Three homes were found to be unstable. The residents had to leave their homes in haste, while they had to leave their household effects behind. Those affected found shelter with relatives or were able to move into a normal home.

Three houses have to be demolished. The buildings were propped up and a scaffolding was erected. Gentsestraat has now been closed to through car traffic for more than three months. Only the vulnerable road user can pass. After the demolition, no more building is allowed on the plots. The city is looking for a social interpretation of this site.

City and OCMW Zottegem: open or closed on 11 July?

With 39 apartments in the former school IZOO, social housing project in the center of Oosterzele

With 39 apartments in the former school IZOO, social housing project in the center of Oosterzele