Decision to allocate barracks postponed by Council of Ministers. Lobby work barracks and possible location is running at full speed 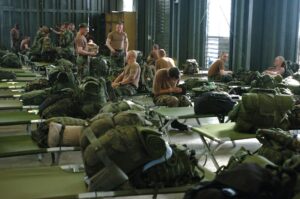 Geraardsbergen. The dossier of the Quarter of the Future was on the agenda of the federal council of ministers on Friday 15 July. The Council of Ministers did not reach a decision. The file may be tabled again next week before the start of the parliamentary recess, otherwise the decision will be postponed until the autumn. Geraardsbergen is, however, in pole position. Unofficially, an elegant solution is being sought to satisfy both Geraardsbergen and Aalter. There is also strong lobbying about a possible location of the new barracks in Geraardsbergen.

On Friday 15 July, the issue of the allocation of the Quarter of the Future was on the agenda of the federal Council of Ministers. The Council of Ministers failed to reach a solution and postponed the decision until next week, possibly until after the parliamentary recess. Geraardsbergen is, however, in pole position.

Political lobbying is in full swing. Groen Aalter has launched a petition in recent weeks against the arrival of a new army barracks in Drongengoed in Ursels. The counter stands at almost 8,500 signatures. The Green ministers in the federal government do the rest.

People are not sitting still in Geraardsbergen either. ‘Geraardsbergen will have its barracks and our Walloon friends can benefit from the construction and subsequently the exploitation of the so-called “Kwartier van de Toekomst” with their companies’, writes Luc Swartebroeckx of Weerbaar Geraardsbergen. Both the Open Vld and the PS would like to take advantage of this advantage.
The great success of the ‘Integral Security’ training at the GO! Atheneum Geraardsbergen is also put forward as an asset. In this way it is hoped for cross-pollination that will benefit both the barracks and the training.

Search for possible location becomes difficult
The search for a possible location for the barracks is a lot more difficult. If the Godsbergkouter is chosen, the city council will have to wait years for a procedural battle. The chance that the project will be delayed for many years is unbearable for many actors, especially because political circles hope for a quick settlement of the file.

That is why we are already looking for another location. In addition, the Unalsite in Overboelare is one of the alternatives in sight. But whether this is realistic is highly questionable. For example, there were recently plans to build a shopping complex on the old factory site between Dender and Gaverstraat. The project was given a red light because the site is prone to flooding. In addition, there was a fear of a mobility infarct. Later plans to build 95 units for craft activities on the site were also discarded. How will things be different for the possible construction of a barracks on this site?

Another location that comes into view is the possible SME site on the Astridlaan next to KSV. Whether this is a feasible card is highly questionable. Assuming that the multifunctional sports complex on the Groendreef will one day be built, we no longer speak of a traffic jam on the Astridlaan, but of a mobility paralysis on the N42.

The city council still has two years to bring this file to a successful conclusion. Whether this is enough will become clear in the coming months.

Geraardsbergen is the only candidate left for new barracks