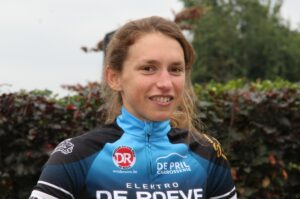 Geraardsbergen/Bevere. The duathlete Maurine Ricour (30) is making history at the World Games in Birmingham (US). On Saturday she took the gold medal after a much-discussed competition. A day later they won silver together with Arnaud Dely.

The match went well for Maurine Ricour. The Beverse top athlete soon ended up in the leading group. While the chasing group deviated from the course due to a lack of signalmen, the way was open for Maurine. In the final test, the Beverse duathlete set the best time. “And so I was able to take the gold for the Japanese Ai Ueda and the two-time Venezuelan world champion Joselyn Brea”, said the overjoyed Maurine Ricour in Het Laatste Nieuws.

On the last day of the world games, Maurine Ricour and Arnaud Dely won another silver medal in the mixed team relay. Both athletes only had to give way to the French.

At the World Duathlon Championships in Targu Mures in Romania earlier this year, Maurine Ricour and Arnaud Dely took the first mixed relay ever at a Duathlon World Cup. Maurine finished in sixth place in the individual athletes. The Beverse athlete is semi-professional and has been training in Geraardsbergen for years. In recent years she sports a nice palmares.