Barracks come to Schendelbeke. ‘We will do everything we can to prevent and contest that legally.’ 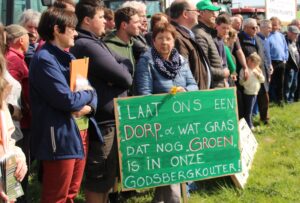 Schendelbeke. The core cabinet has decided today that the barracks will be located in Schendelbeke. ‘A location in Aalter was also eligible, but according to the government, the site near Geraardsbergen is the best option. It is the intention that all kinds of business activities will also arise in the vicinity of the barracks’, reports the VRT. The barracks will cost 120 million euros. No decision has yet been made on a new training ground. The action committee Red De Godsbergkouter reacts disappointed. ‘We thought that the file would still turn to Ursel because Mayor De Crem there stated so firmly that he would bring in the barracks… We are combative. We will do everything we can to prevent and dispute this legally. This will be a procedural battle that will take years’, says Johan Verbruggen of the action committee.

Decision to allocate barracks postponed by Council of Ministers. Lobby work barracks and possible location is running at full speed

Geraardsbergen once again welcomes an impressive number of ultra racers