‘The arrival of the barracks is a disaster for the open space. The water bomb threatens.’ 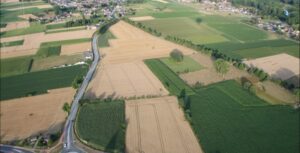 Schendelbeke. ‘After years of closing barracks all over the country, the reverse movement is now being planned: ‘quarters of the future’ should be set up at certain strategic locations in Belgium, in order to make more young people interested in a job at Defense with a better regional spread. ‘, says Jonas Hanssens of the action committee Save the Godsberg coulter.

The province of East Flanders is one of those regions where one sees fifteen minutes of the future. Local authorities had to submit their candidacy before mid-March. Two applications were submitted in East Flanders. one through the city of Geraardsbergen and the other through Aalter. ‘Local political lobbying takes precedence over a clear political vision where one can realize the so-called ‘quarter of the future’, says Jonas Hanssens.

Existing military sites unused or repurposed
This spring, the Flemish government approved the construction shift. The intention is to unnecessarily take up additional open space, because this open space in urbanized Flanders is already under considerable pressure. ‘This is just the opposite of what is on the table with the current compromise: in Geraardsbergen a continuous zone of open space would be sacrificed, while 20 km further in Semmerzake a large military domain remains untouched. Against the wishes of mayor Dierick, the last soldiers had to leave at the end of 2020. Another 30 km away is the military base of Aalter, 214 hectares in size, but apparently not suitable for Defense…’

‘The arrival of the barracks is a disaster for the open space. The water bomb threatens. The city of Geraardsbergen has applied to have the ‘Barracks of the future’ built on its territory. Depending on the plans, 70 to 80 hectares of reconfirmed agricultural land (HAG) will be taken over in one fell swoop for the realization of this military base.’

‘The arrival of the barracks is a disaster for the open space. The water bomb threatens.’