“While I lay on the ground, the aggressor continued to pound my head. The others stood by and did nothing.’ 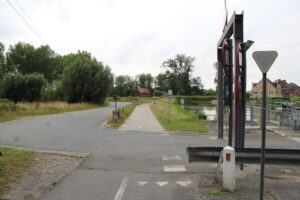 Idegem/Appelterre. On Sunday evening, June 17, BDM was brutally beaten at the lock in Idegem. He suffered trauma and serious facial damage. According to the victim, there was no reason and the perpetrator was out for a fight. Yesterday, the editors were tipped off about the incident. After some research we got BDM on the phone. We were able to convince him to tell his story. He was generously supported by his father. The victim doesn’t want his name mentioned. “I wouldn’t want him at my door tomorrow.” The family hopes the police will do a thorough investigation. “It is unbearable to think that the perpetrator is on the loose and could strike again tomorrow.”

On Sunday evening, June 17, BDM is going for a ride with the bike. He drives from Appelterre to Geraardsbergen and returns via the towpath. He rides a recreational bicycle because he can get more of the environment 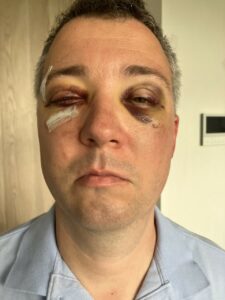 to enjoy. At the lock of Idegem – just at the bridge – adults and a child stand across the entire width of the towpath. One of the people in the group yells: ‘Brake, brake!’ “I already did that. After all, I couldn’t get through because they blocked the passage,” BDM testifies

“They stood there and watched it.”
As the cyclist slows down, the group makes way to let him pass. BDM stops for a moment and asks if there is a problem, because one of them yelled ‘brake, brake’. At that moment, BDM gets a boost. “I nearly fell to the floor, causing my glasses to skew.” While the cyclist is adjusting his glasses, the person who yelled ‘brake, brake’ punches him in the face. “I was seriously hit, fell to the ground and tried to protect my head with my arms.” The man does not know what to do with his aggression and shouts: ‘Jump into the Dender.’ While the cyclist lies on the ground, the aggressor continues to pound his head with his fists. The three people standing by watch the event, but do not intervene.

At that moment a black van driving towards Idegem stops at the bridge. The driver of the van yells at the aggressor to stop or call the police. The aggressor stops hitting. BDM can escape but the aggressor still mocks him. The man from Appelterre runs via De Dijk in the direction of Onkerzelestraat and calls the emergency services. He’s in very bad shape. His right eye is closed and his left eye is cloudy. His glasses are broken and he is covered in blood.

Broken eye socket and lost 70% vision
BDM is transferred by the emergency services to the ASZ of Geraardsbergen. After an examination, they determine that his eye socket is broken and that there are serious problems with his left eye. They contact an ophthalmologist in De Pinte to whom he is immediately referred. After a second examination, he is sent to the UZ in Ghent, where he has to undergo various examinations until deep into the night. There they determine that BDM has lost 70% of his vision from his left eye. 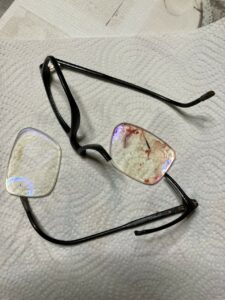 Whether the damage to his eye will continue cannot be determined at this time. “In the best case scenario, it can take weeks to months before his sight is restored,” BDM said. In the worst case, the eye is damaged. After a week he got his right eye open again. BDM also has a lot of headaches, pain in the teeth, pain in the back and neck… For BDM the experience was very traumatic. The victim has been incapacitated since the act and is unable to drive the car. The traumatic events were a very heavy blow to his immediate family.
According to BDM, there was no reason whatsoever to resort to such brutal violence. “The perpetrator was out for a fight.”

The perpetrator is a short-shaven, muscular, tanned and broad-shouldered man of about 35 years old. The aggressor has an athletic build. He is between 1.75 and 1.80 meters tall and wore an apple blue sea green T-shirt during the facts. The man has no visible tattoos and wears no piercings. He also doesn’t wear a beard or glasses. Given the situation, BDM cannot give a description of the other attendees.

‘The perpetrator must be known in Idegem.’
At the time of the facts, a baptism and a birthday party took place in Idegem. Presumably the two couples and the child came from one of the parties and returned home. Judging by the perpetrator’s dialect, according to BDM, these people would certainly live in the area. “I’m pretty sure they were noticed by passersby.” In the Ankerstraat there are several places that have a camera on the front. BDM’s father requested the images, but in the end did not get hold of them.

BDM has lodged a complaint against an unknown person with the police of Geraardsbergen/Lierde. The victim hopes that the police will work on the investigation. “It is unbearable to think that the perpetrator is on the loose and could strike again tomorrow.” According to the victim, there are indeed leads for further investigation. “I’m sure the perpetrator and his company have been spotted. Moreover, the police had ample opportunity and the opportunity to request the images from the various cases in Ankerstraat.’