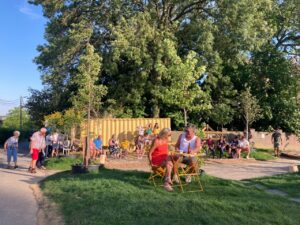 Geraardsbergen. From Saturday 25 June to Friday 29 July, Onkerzeleplein was given a new look. For five weeks, the paved parking location was transformed into a vibrant, green and healthy meeting place. Volunteers from 3 associations are supporting this initiative: the KSA, the church council and the village council of Onkerzele. Friday 29 July they organize the musical closing party. This temporary pop-up will be demolished on Saturday 30 July and will then move to the next square.

Onkerzeleplein attracts residents for a month
Numerous activities were on the agenda to invite the inhabitants of Onkerzele to their temporarily furnished square, from a performance by the KSA brass band to a neighborhood chat and singing songs during Onkerzele sings. The church council planned their ‘Cycling Week’ together with the visit of De Bouwdoos. Among other things, they organized an exhibition and family bike rides. There was also a lot to do for the little ones, from a magic square and KSA game afternoon to singing songs around the fire bowl.

“It was nice to see how associations and volunteers showed their most creative side. The activities went very smoothly and many people from Onkerzele were able to come to the square. Thank you in advance to everyone who has contributed to this,” says alderman for citizen participation Kristin Vangeyte.

Friday 29 July De Bouwdoos will be closed with an exuberant party with a lot of great music by Hugo De Talking Post and a performance by the J&B band from 6 to 9 pm.

Demolition square on July 30 at 9 o’clock
The square will be demolished on Saturday 30 July. The play elements, the bench, the barefoot path, the geodome, the lashed picnic tables, … disappear again in the container. The green elements will also be brought together, because everything will be moved to the next square for a temporary redesign. The residents who would like to lend a hand with the demolition are more than welcome from 9 am. In the week of August 1, the Technical Service of the local government will clean the square and remove the rest of the material. Onkerzeleplein will be open to traffic again from Saturday 5 August.

Plan for the future
After the summer, the project will be evaluated to see whether a more sustainable proposal can be made from the temporary use of the square. “With De Bouwdoos we have a test set-up to work towards a definitive and sustainable layout of the Onkerzeleplein in the future. Many people appreciate the greenery, the rest and meeting place and the play elements for the children,” says Fernand Van Trimpont, alderman for urban development.