Karel Mortier is 95 years old and has just published his first novel, an essayistic novel. 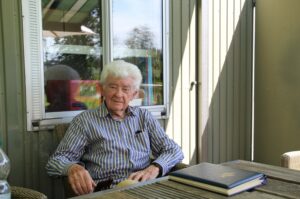 Nederboelare. Karel Mortier is 94 and has just published his first book. He leaves it up to you during a conversation whether he will still publish there. The prolific writer is not ready for his test piece. For more than thirty years he has kept a diary – and since 2011 a blog – where he elaborates on the most diverse literary, philosophical and religious subjects. His thoughts are rough sculptures of the most diverse ideas and musings. ‘The Breath of the Days’ is a collection of philosophical thoughts, in-depth conversations and poetry.

Karel Mortier (94) wrote a book ‘The Breath of the Days’. It is a religiously inspired novel that is not easy to summarize. ‘The Breath of the Days’ is an account of a number of people who enter into conversation in the attempt to clarify ‘what meaning should be given both to the phenomenon of the Big Bang and to the judgment passed in Genisis 3 ,19.’ It says that in the end we are just dust. The subtitle of the book is: ‘Record of a Thought’. According to the author, this refers to the fact that everything originated from the mind.

About the essence of our existence… 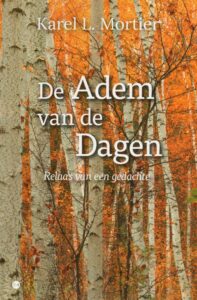 In a conversation we had together in mid-June, Karel Mortier compares his book to a medieval painting, with a few figures in the foreground and a landscape in the background. ‘The figures talk to each other about the most diverse subjects. In the background is the mind that represents the philosophical thoughts spoken of.’

Karel Mortier is not ready for his test piece. He has been keeping a diary for over thirty years. In it he does not talk about the everyday affairs that occupy him, but gives his mind free rein on many philosophical and religious subjects that concern him. Since 2011, he has switched to a blog, where he writes 500 words every day. His book is the ultimate compilation of everything he has written over the past thirty years. ‘It is my spiritual will’, the author testifies. ‘The Breath of the Days’ is a collection of philosophical thoughts, in-depth conversations and poetry. ‘Because it is precisely in poetry that you can express the most philosophical thoughts in a profound, but spirited way.’

His lyrics don’t read like a polished novel. According to Karel Mortier, his book is rather ‘an essayistic novel’. His paragraphs are roughly sculpted from the thoughts and many musings on the essence of our existence. ‘Man is the only being who can give meaning with his consciousness. Without humans, existence would be meaningless’, Karel Mortier confides to me. “If we’re there, it’s because nature has willed it.” According to the author there is ‘an essence’ in the cosmos that man has ‘willed’. “Galileo Galilei was the first to give us a place in the universe.”

His life in a nutshell
Karel Mortier was born in Oordegem on December 29, 1927 and spends part of his childhood there. At the end of the Second World War, the family moves to Serskamp. ‘From Serskamp I was a 10-minute walk from the platform of Schellebelle station’, says Karel Mortier. After his secondary education studies, the multi-writer from Nederboelare gets a job at the National Bank. In the meantime Karel Mortier is doing his military service, but once he returns, he will continue to work for the National Bank for the rest of his life. After an intermediate station in Ypres, he arrives in Geraardsbergen, where he will lead a branch of the National Bank. He then briefly goes to Tienen to end up in Ghent, where he has a new bank building built. Karel Mortier is an autodidact. He gradually learns the trade. He successfully participates in various exams and thus gradually climbs up.

He eventually retired there. Since his wife is from this region, he ends up in Geraardsbergen after his career. Karel Mortier struggles through open-heart surgery, which doesn’t stop him from living very old. “The great secret is the mind and a strong body,” he testifies. Karel goes hiking very regularly and regularly goes into the Swiss Alps. He’s still a bookworm. “All my life I’ve read a lot.”

When asked whether he lives apart from reality, Karel Mortier answers: ‘Inevitable. Reality has no impact on me.’ Karel lost his first wife more than thirty years ago and met another woman in Geraardsbergen. ‘My life changed completely then,’ the author testifies. Karel has 4 daughters and many grandchildren and great-grandchildren.

‘From Gezelle to Van Ostaijen…’
Without skipping a day, Karel Mortier has been writing 500 words on his blog every day since 2011. It is with great pleasure that we offer you an excerpt from his blog. The introduction is by Albert Schrever.

‘City fellow Karel Mortier is 94, a former executive at the National Bank and since 2011 he has been writing a blog every day, without skipping a day. We get to read what he thinks, feels, hears, experiences, reads… In his blogs we experience his great reading: from Dante to Shakespeare, from Gezelle to Van Ostaijen… He regularly takes us to Switzerland and the Swiss mountains… we enjoy his imagination at the edge of the pond… His blogs also bear witness to serious thinking and spiritual considerations…’ (Albert Schrever)

‘I admire – and envy – Cees Nooteboom who has traveled the world, not only the world as a world, but also the world of books and art. The wealth that this man displays is immense, you should try to follow him on his journeys through the paradors of Spain, because – and if he was right – he did not do it for less. I read his book ‘The Detour to Santiago’, it can take you months, or rather, you must take months to read it thoroughly, as it was thoroughly written.

That he seeks the glory is given to him in full, but that I dare to seek it is an abominable case, and I know it all too well. I should go back to see if I’ve written anything about the book in my previous blogs, but his ‘Detour’ has stuck with me, is at the top of my books in recent years, although there aren’t that many, for I have limited myself to what I bought to read.

It is therefore clear to me that instead of traveling the landscapes of Spain I have been forced to walk the landscape of the mind, which should then be or become my merit.’

The Breath of the Days of Karel Mortier can be ordered via: [email protected]