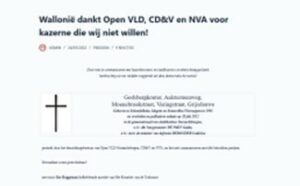 Geraardsbergen/Schendelbeke. In a stinging obituary, the action committee ‘Red De Godsbergkouter’ announces the death of the neighborhood where the barracks may be located. It is striking that in addition to the CD&V and the Open Vld, the N-VA also suffers. Weerbaar Geraardsbergen emphasizes that the Flemish national party has no eye for the strong community sting in the file. According to the city council, the location has not yet been determined and participation is possible. But according to many activists, participation comes too late.

Following the arrival of the barracks in Geraardsbergen, the action committee ‘Red De Godsbergkouter’ starts a political campaign. In an obituary, the action committee announced the death of ‘the Godsbergkouter, the Aalstesteenweg, the Moenebroekstraat, the Varingstraat and the Grijsduwe’. The neighborhood where the barracks will be located has died ‘after palliative sedation on July 20, 2022 in the municipal council of the city council of Geraardsbergen, led by Mr. Mayor DE PADT Guido, led by Mrs. Defense Minister DEDONDER Ludivine’.

Death note
‘Boosted by the one-way board of Open VLD Geraardsbergen, CD&V and NVA, and the failure to communicate with all parties involved.’ It also reads: ‘This is something you report with great pride: Mrs. Ilse Roggeman, the loving mother of Het Kwartier van de Toekomst.’ The council of aldermen and the chairman of the municipal council also share in the blow.

The death is reported in sadness by ‘the inhabitants of Schendelbeke, Idegem, Smeerebbe-Vloerzegem and Ophasselt; the managers of the nature reserves in the area; the playing youth on provincial domain De Gavers; people who want to enjoy peace and nature in the provincial domain De Gavers; our local farmers who can no longer be farmers because their fertile lands are being taken away; the more than 3000 signatories of the petition “Save De Godsbergkouter – no military barracks in our villages”; all members and sympathizers of the action committee “Red De Godsbergkouter”’

The obituary ends with a clear message: ‘ For the sustained struggle and the preservation of peace, beautiful nature and fertile grounds, we sincerely thank all sympathizers and associations who have committed themselves to stopping this amazing project by the city council of Geraardsbergen!! !’

N-VA shares in the blows
It is remarkable that, in addition to the CD&V and the Open Vld, the N-VA also suffers. The reason is an article about municipal councilor Ilse Roggeman in a flyer that ended up in all buses in Geraardsbergen. It states that the N-VA municipal councilor proposed to the city council in the autumn of 2021 that ‘the city of Geraardsbergen would put itself forward to house a new barracks for Defense: the so-called Kwartier van de Toekomst.’ It also reads: ‘A fine example of constructive opposition’.

According to the N-VA, the arrival of the barracks would ‘give a real boost to our beautiful city’. The N-VA notes in the folder the many advantages of the arrival of the barracks, but limits the disadvantages to a minimum: ‘The N-VA understands that there is a lot of unrest among farmers and residents of Schendelbeke’. The N-VA wants to work to ‘limit the possible negative effects to a minimum.’ But according to the activists, ‘the negative effects’ go much further than described in the N-VA folder. They refer to their website where the possible impact is clearly described.

According to Weerbaar Geraardsbergen, the N-VA has no eye at all for the community sting in the file: ‘The PS is now the proud owner of a barracks in Charleroi and, as a bonus, of half a barracks in Geraardsbergen which, in order to to say the words of the PS defense minister, was specially chosen because of the “location near the language border with a view to the creation of a bilingual unit”. Talk about a blow to the jaw…’ ‘The fact that the Flemish nationalists are now saddled with a bilingual barracks in their own garden is only due to their many years of ambiguous, rambling and indefinable political attitude.’

Alternative location
According to the city council, the location of the barracks has not yet been determined. A recently published press release states: ‘A spatial redevelopment process is being started, in which a spatial implementation plan (RUP) is drawn up in consultation with various authorities and organizations. During this procedure, all relevant advisory bodies are involved and consultation moments are organised.
An alternative study also takes place when the spatial implementation plan (RUP) is drawn up. In other words, other locations are still being looked at. Only the most optimal location is retained. This also takes into account all possible environmental effects in terms of mobility, agriculture, fauna and flora, noise…’

According to many activists, the participation comes too late.

THE VIEW: Tourist Office of the City of Zottegem / Museum Folklore

THE VIEW: Tourist Office of the City of Zottegem / Museum Folklore