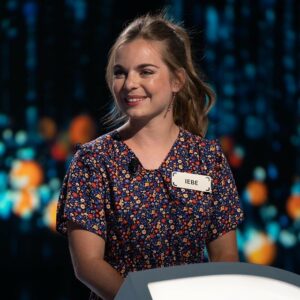 Geraardsbergen. Iebe De Quick is gradually becoming a well-known Fleming. She has already successfully participated twice in a well-known game program: Blocks and Switch. The 23-year-old from Geraardsbergen could count on a lot of acclaim with her radiant smile and her solid, ready knowledge. I dream of participating in The smartest person‘ she lets out. Iebe is a busy bee. In addition to an intense job, she plans to follow additional training courses and also participates in duathlon. Not to be underestimated. During her youth she also went to music school and was active in the Chiro of Sint-Bartel.

Iebe De Quick from Geraardsbergen gained attention by successfully participating in Bloks en Switch, popular VRT game programs. “A friend works at the VRT and informed me before the corona period that the Bokken game program was looking for young women to participate,” says Iebe De Quick. After a selection round, Iebe got the green light to go on the TV with Ben Crabbé. ‘In the end it took until 2021 before the program was recorded.’ Iebe took part in Bloks four times and won three times. 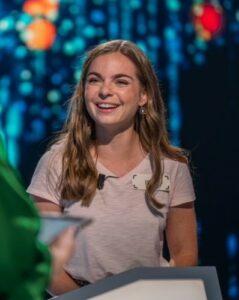 Iebe is also a fan of Switch. Switch is a game program that has been broadcast on VRT in July and August since 2016. The presentation of the quiz was in the hands of Adriaan Van den Hoof from 2016 to early 2022. From the summer of 2022, the presentation will be provided by Fien Germijns. She registered for the quiz and was allowed to participate. Last week Iebe appeared on the tube every evening. She describes the participation as ‘a very nice experience’. She won two finals, which is very impressive. The final is very exciting. Iebe was given one minute to correctly answer five questions in a row. Despite the stress that comes with it, it went very smoothly.

Financially, Iebe’s participation in the various game programs was beneficial to her. “For my three wins on Blocks, I cashed in €3,000 and for the two finals won at Switch, I received €2,000,” she testified. In addition, she won another television set at Bloks and when she lost in the fourth participation, she received a high-pressure cleaner on top as a consolation prize.

The participation in such game programs is quite tiring. For Bloks, Iebe was allowed to perform for two days. One day was enough to participate in Switch. The day started at 10:00 am. ‘I wasn’t home until 10 p.m.’, testifies Iebe. ‘It was also a long day for the fans.’ During her participation, the young Geraardsbergen resident could count on the necessary support from family and friends. Ben Crabbé later met them again. ‘Recently there was a performance in the Preacher to replace the music group De Mens and then I met Ben Crabbé again. It was a nice reunion.’

The impact of such a participation should not be underestimated, according to Iebe De Quick. ‘A lot of people watch these game shows. You are regularly approached on the street.’ She also received a lot of reactions on Facebook. ‘Obviously I didn’t do it for that, but mainly because I’m good at quizzing.’ Iebe follows current events closely. ‘I have also been given a good foundation from home.’ Iebe De Quick does not rule out that she will participate in such a quiz in the future. I dream of participating in The smartest person‘, Iebe lets out.

Creative family
Iebe is 23 years old and works in the fertility center of the UZ in Brussels. ‘Together with a colleague, I am responsible for cancer patients who want to freeze eggs before they start treatment.’ Iebe De Quick already has a bachelor’s degree in midwifery, but is aiming for more. ‘From September, I’ll be taking a two-year Care Management course, an advanced bachelor’s degree, which she will combine with her current job. It’s going to be a busy period,” she says.

Iebe received primary education in Carmelite. She then did her secondary education at the Sint-Catharina College in Geraardsbergen, where she successfully followed Greek-Latin. She then studied midwifery in Ghent. During her youth she went to music school and was active at the Chiro van Sint-Bartel. She was in charge for five years. ‘My social life takes place entirely in Geraardsbergen.’

Iebe doesn’t like strangers. The De Quick family is very creative. ‘Aunt Nele has her own sewing workshop. My parents recently made the news for bringing over a Ukrainian family. Uncle Dirk contributes to radio Mfm.’ We are still hearing from Iebe.