In the district of Elsdries in Melle, the 50th anniversary of the Elsdries fair was celebrated with a procession of the giants of Melle and the Confrerie van de Roze Olifant. “Mapoe and Ruut are two folk figures who used to live in Melle. Mapoe, for example, had a cafe for a long time. The entire Elsdries committee was honored. 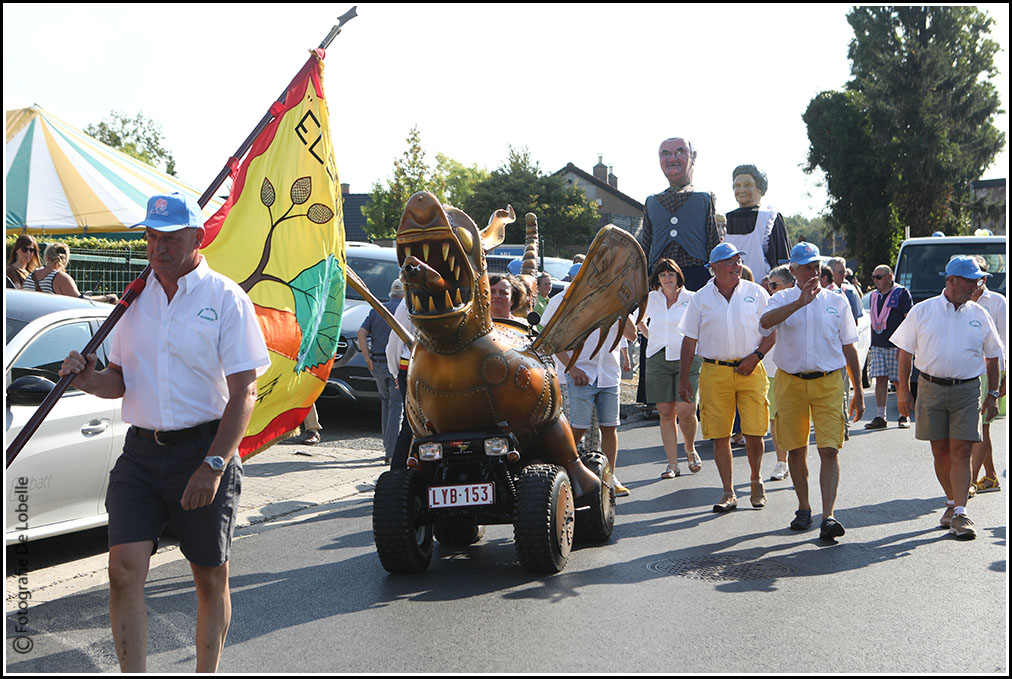 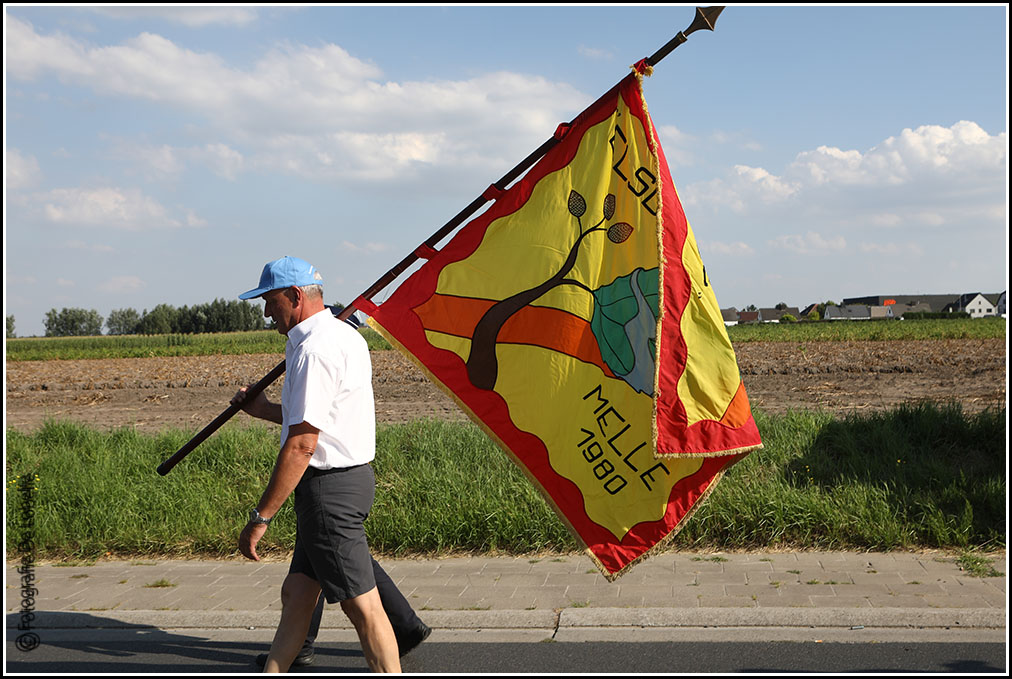 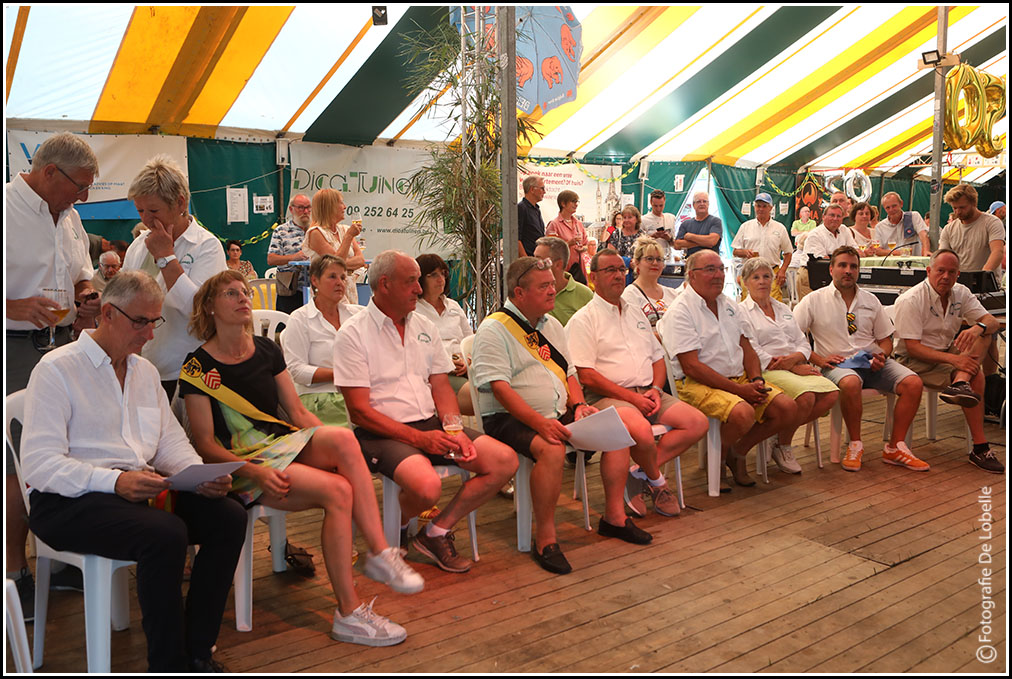 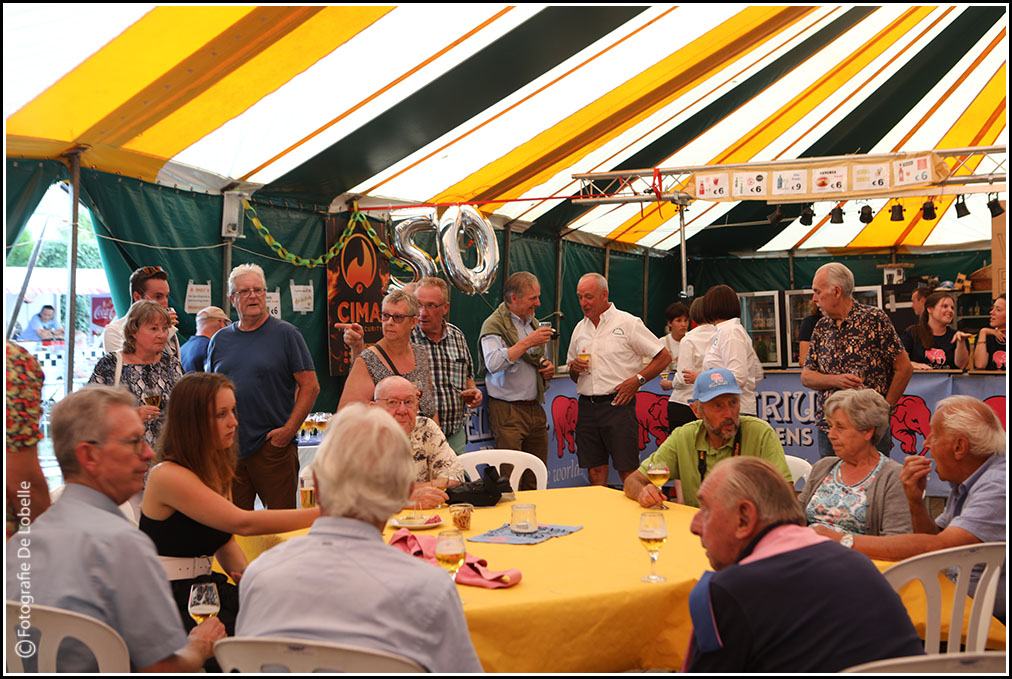 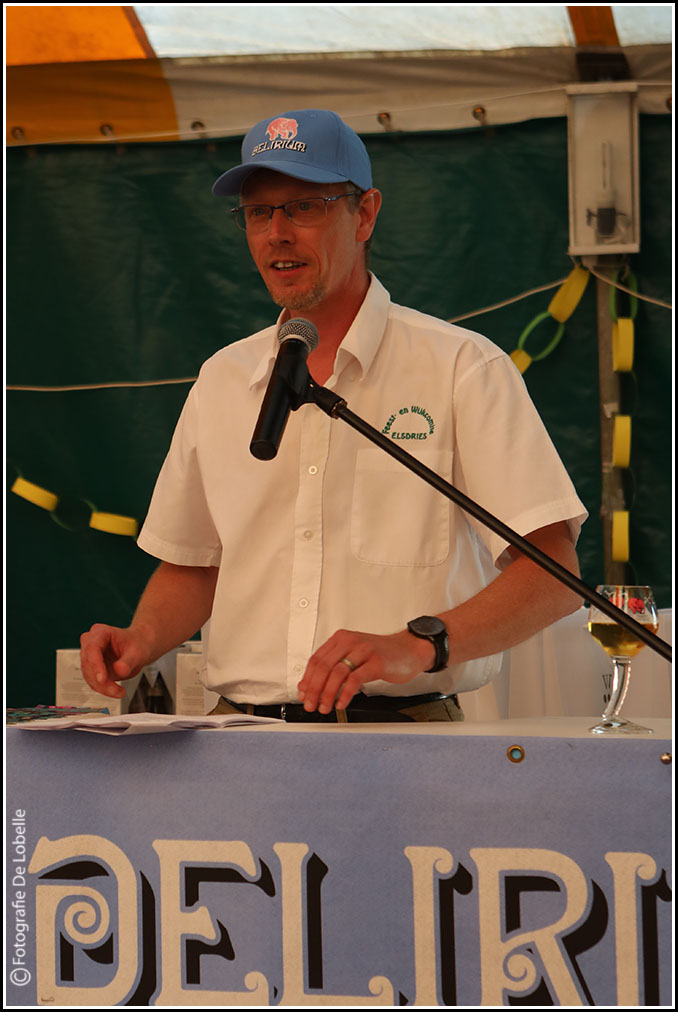 From the 1950s, more buildings were built and the (Kleine) Elsdries grew into a real residential area. In the 1960s, 5 cafes were active in the neighborhood and there were already neighborhood fairs. In the early 1970s, young people in Schauwegemstraat organized youth activities during the holidays. This was the start of a neighborhood operation! An undeveloped site in Schauwegemstraat was made available by architect De Cuyper as a playground. Game afternoons were organized and a club was founded, which included Rudy De Bruycker, Christiaan Van Den Berghe, Luc Versnaeyen, Linda Bekaert and Christel De Vos. Linda is still active as a board member. At that time, a lot of attention was paid to football. The mothers competed against the daughters. They played the first official game during the festivities of “Kom over de brug”. The mini football tournament at the current Kermis is a nod to these times and took place for the first time in 2005. 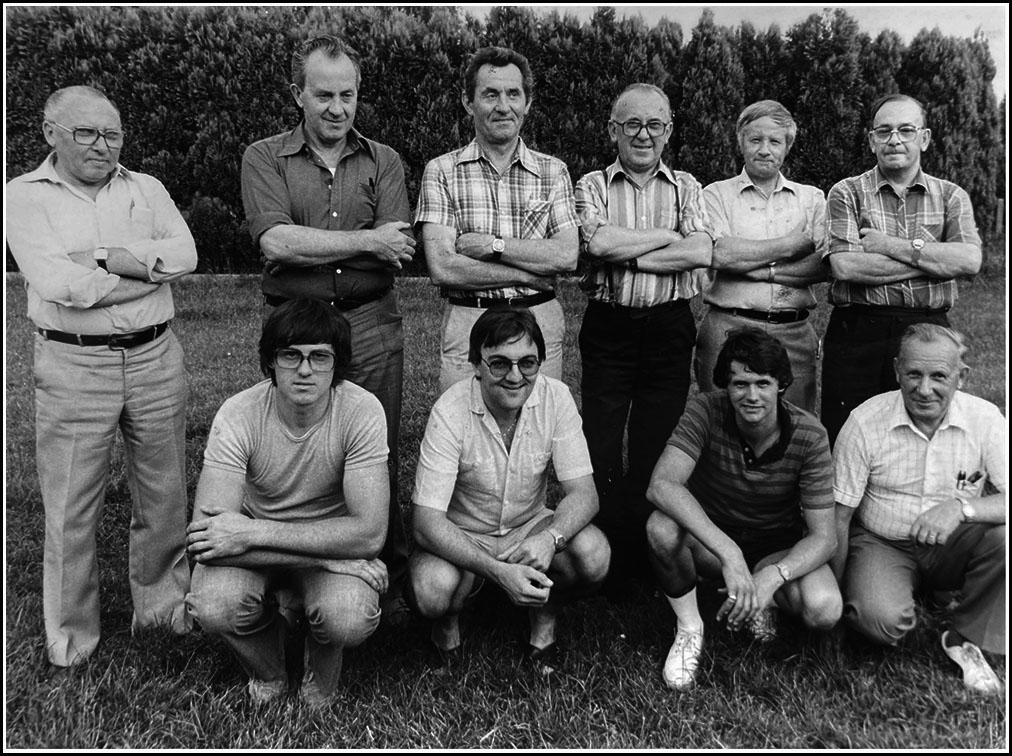 The brand new committee coordinated the activities of the youth, adults and the elderly. With a minimal budget (obtained from youth activities) in 1971, after a long time, a 1ste fair organized. Since then, the fair has been an annual activity in our neighborhood (except in 2020 and 2021 due to the Coronapandemic) and is known from far and wide.Photo flag

In 1979, a drawing competition was organized on Youth Day in August. The assignment for the 12-year-olds was to draw a flag for the neighborhood. Annelies Versyp, daughter of Nolle Versyp, provided the winning design. The flag was raised on the 10 . in 1980of fair dedicated under the sponsorship of Hendrik Heyndrickx and Denise van Gansberghe. 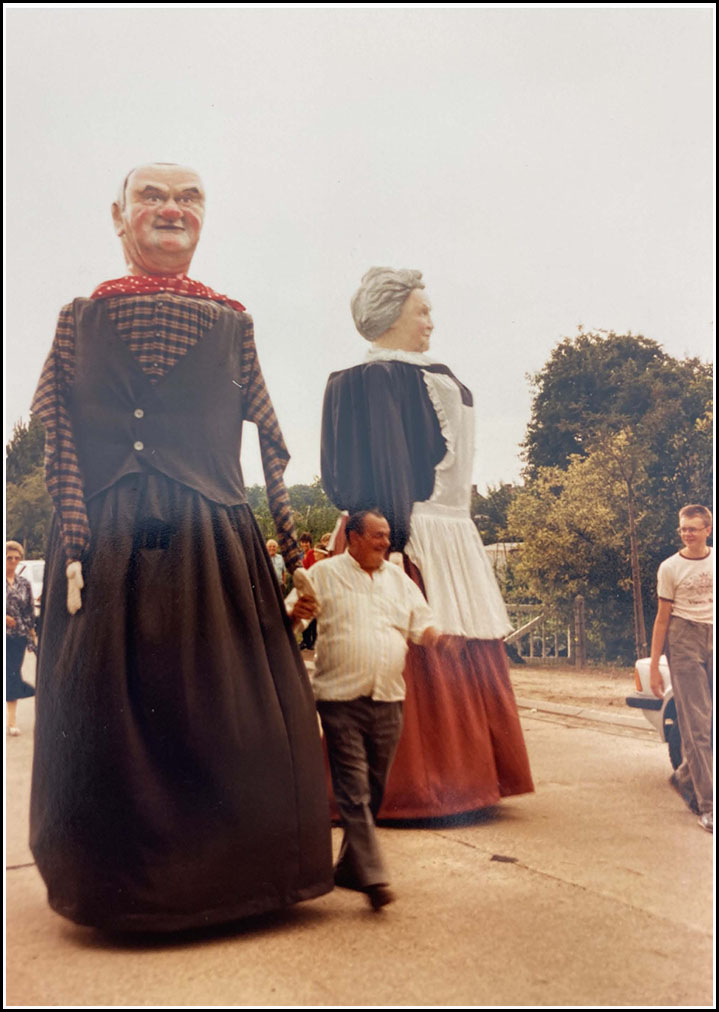 The giants Ruut and Mapoe visit the fair in the 1980s.

Today we have children’s entertainment and children’s jogging at the fair for the children. We also supervise Sint and Pieten in the neighborhood and there is a pancake party in February. 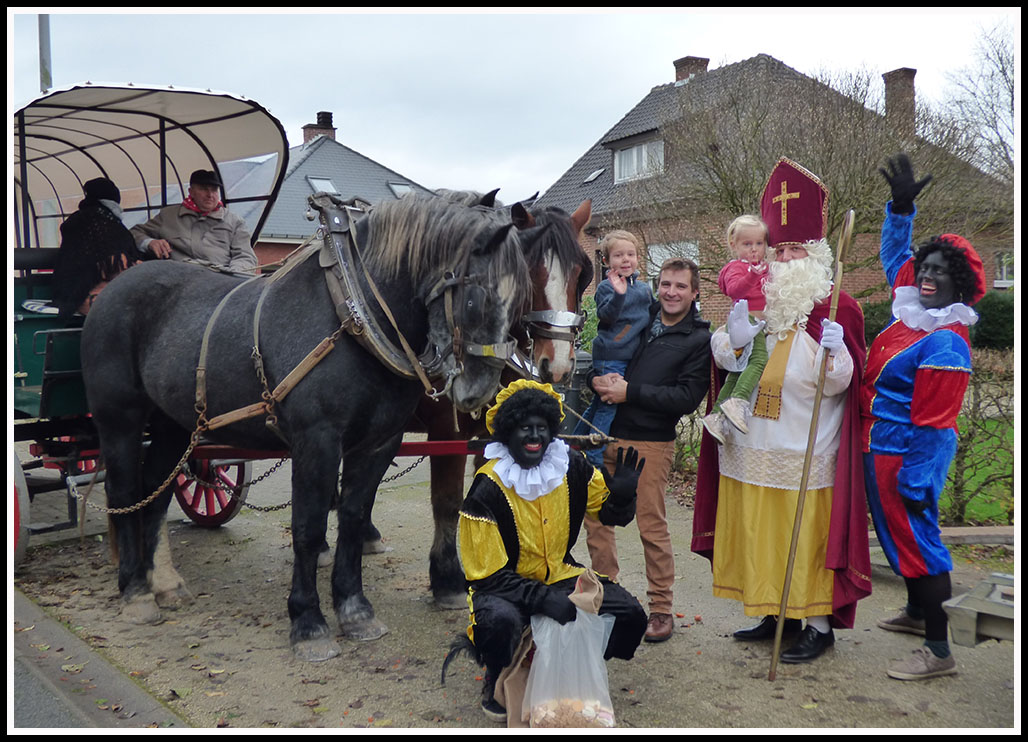 We would also like to thank Gerarda Poelman for the many years in which she supported the work for the elderly. She succeeded her mother-in-law Julia De Witte in this role. 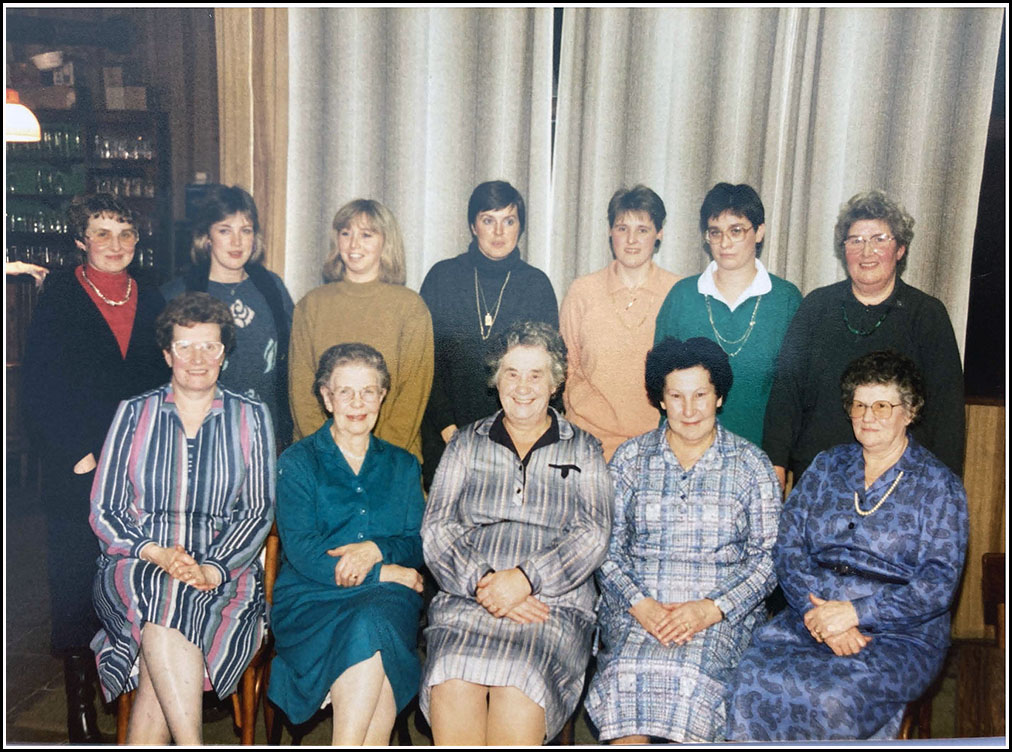 In 1990 “James Last” and his orchestra came along for the 20th anniversary. The grounds behind the clubhouse were cleaned up in 1991 and decorated with toys.

In 1992 Gilbert Van Maele became chairman, succeeding Walther Vandenheede. At the fairs there were cards, shooters on the seesaw, cycling races and coffee tables with the musical guests “The Wilcomets”.

In 1995, 25 years of fun fair was celebrated in and around the marquee at the club room on the corner of the Beek- en Schauwegemstraat. It was then 2 weekends party. For this fair, a jogging track, a trip to the amusement park “Meli”, a covered wagon ride for children with a fire-breathing dragon, a barbecue, an aperitif concert and a celebration of the Eucharist were organized.

The clubhouse had to be demolished in 1999. In 2000, unfortunately, we were confronted with the sale of the grounds of Poelman and the municipality. Since then we have been using it school grounds and the school buildings in the Beekstraat (first Malpertuus primary school (community education), then the Lucerna College), later we could play cards and meet in the OCMW room in Schauwegemstraat. After the disappearance of the dining hall and other classrooms of the Lucerna College (in 2016), the collaboration with the municipal primary school was established and we could continue our dinner parties there until Corona put everything ‘on hold’. 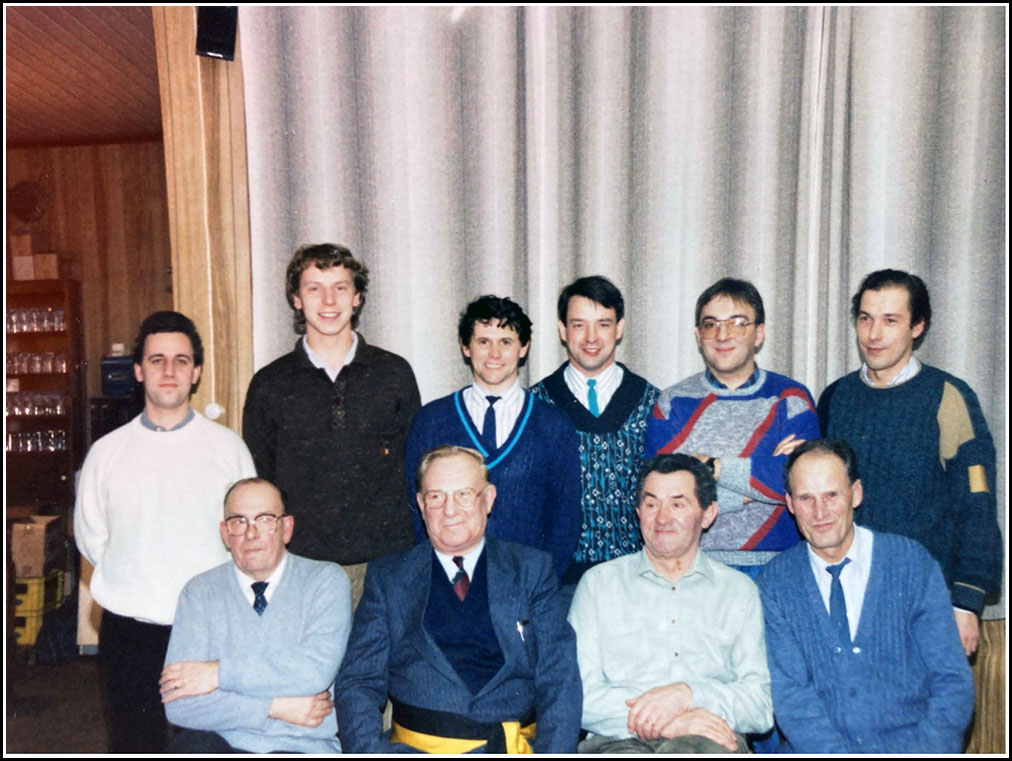 The fair in 2010 (40 years of the fair) was memorable with its beach party. In the period 2006-2011, Jo Dick took over the role of chairman from Gilbert Van Maele because of his chairmanship of the OCMW. Afterwards, Gilbert resumed the presidency.

In 2018 Lucien Van Bockstaele and Roger Rombout took over the tickets on Monday afternoon from Gerarda. Over the past 10 years, the committee has also organized a New Year’s reception, a dew tour and the mussel souper. In addition to the attention for children, special attention was also paid to the elderly. We organize a senior meal for them.

In 2019 Gilbert finally passed the torch to Pascal De Rop.

In the meantime, the Park School has been built and we hope to be able to further develop our activities there, together with the municipality. The use of the meeting room in the OCMW on Schauwegemstraat has also been discontinued, so that (for the time being) no more card afternoons will take place and our meetings will continue ‘at the home’ of our board members. A solution via the Kleine Havertuin is in the works.

The round numbers (10 years, 25 years, 35 years, 40 years and now also 50 years) in our association have always received extra attention. These fairs were and are accompanied by tributes. We hope that our program of 50 years Elsdries will also give rise to memorable moments. Because of Corona we haven’t been able to organize a fair for 2 years, so we are now celebrating for 2020, 2021 and 2022!

We extend a special word of thanks to the municipality, its board, administrative and technical staff, the police, the fire brigade and not least all authorities, self-employed, companies, artists and sympathizers who have made our operation possible by granting permits. , cooperation, good advice and assistance and the provision of various accommodations. We certainly do not forget to thank the many sponsors who have supported us financially or materially through thick and thin for years!

Who would like to contribute to this unique neighborhood effect is most welcome!