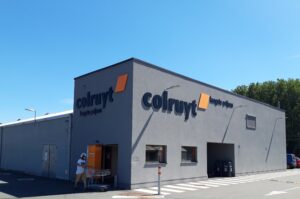 overcrowded. The Colruyt in Overboelare will not only close its doors from Monday 8 to Tuesday 16 August due to work on the N42, the store will also close for more than five weeks from Saturday 17 September. The reason is that the Colruyt in Geraardsbergen is in need of a major makeover.

The Groteweg (N42) will be completely closed to all traffic between the Aveve and the intersection with the Donkerstraat from 8 August. De Colruyt will not be accessible and will close its doors from Monday 8 August until at least Tuesday 16 August. But the store will also be closed for at least 5 weeks in September and October. From Saturday 17 September to Wednesday 26 October, Colruyt Geraardsbergen will close its doors for a major makeover.

8 augustus
The Roads and Traffic Agency will start asphalt works on the Groteweg (N42) in Geraardsbergen on Monday 8 August. Normally the store will open again on Tuesday 16 August. ‘A lot will depend on how the road works progress’, says a spokeswoman for De Colruyt. If the works are completed by the scheduled date, the store will reopen on Wednesday 17 August. But if the works take longer due to unforeseen circumstances, the reopening of the store will be postponed.’

Heavy transport (+7.5 tons) is diverted via Ronse and Brakel.

For those who want to continue to visit De Colruyt in the meantime, you can visit the fortress in Ninove, Brakel, Edingen or Ath.