Minister Diependaele invests in €100,000 in restoration of the roof and facades of Boelare Castle 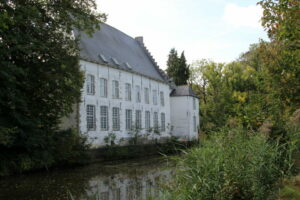 Brussels/Geraardsbergen. Minister Diependaele (N-VA) is investing in four East Flemish heritage gems. One of these is Boelare Castle, where 100,000 euros are being earmarked for the restoration of the roof and facades.

Flemish Minister for Immovable Heritage Matthias Diependaele gives the green light for four restoration projects in the province of East Flanders. The Flemish government allocates a premium of EUR 365,121.30 for these projects. ‘Thanks to the standard premium, owners of immovable heritage can quickly receive support to maintain their heritage via a simple procedure. I am very pleased that this rule is being used en masse to keep the heritage in good condition. That is the best way to avoid expensive restorations in the future’, says Minister Diependaele.

Restoration roof and facades of the castle
The castle of Boelare is currently empty and is being repurposed into space for socio-cultural activities with a kitchen for the retirement home group ‘Baronie van Boelare’ and a caretaker’s house. Restoration works are planned for the exterior of the park wing and the connecting volume between the park and water wing. It concerns the repair of facades, roofs and joinery and painting. The interior was badly damaged during a previous renovation phase. The planned works will ensure the maintenance and restoration of the heritage. A premium of 100,000 euros has been awarded for the restoration work.

The castle has historical value as an originally moated castle on the banks of the Dender, which housed the seat of the barony of Boelare. Originally it was built in the Renaissance style, but after a fire it was adapted in the Louis XV style, only to be further adapted in the course of the 19th century. The artistic value lies in the interior decoration, which is characterized by 18th century stucco with rocaille motifs, grisaille paintings with putti in the door pieces, monumental marble fireplaces in Louis XV and XVI style and 18th century joinery.

Desludge moat
In June, the minister announced an investment of 150,000 euros for desilting the moat of the castle. The sludge is removed from the moat and disposed of. After the silt has been removed, a bank protection will be placed.

Self-scans in the library of Brakel

Self-scans in the library of Brakel