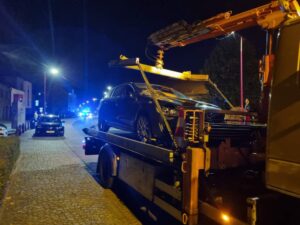 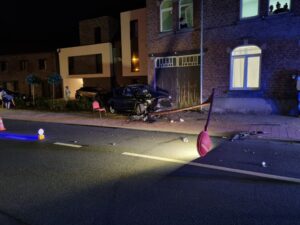 Ophasselt On Wednesday night, a serious car accident happened in Ophasselt on the Leopoldlaan – just past the Sint-Pietersbandenkerk. A black Mitsubishi drove towards Brakel. According to witnesses, the man fell asleep and lost control of the steering wheel. He crossed the road and came across a facade of a house and a lighting pole on the other side of the Leopoldlaan.

The light pole fell across the road. A Volvo driving from Brakel in the direction of Ninove was unable to avoid the lighting pole and collided with it. With the Volvo it remained with material damage. The damage to the Mitsubishi was considerable. There were several people in the car, including two children. One of the children was injured and was transferred for care and examination.

The police and emergency services were quickly on the scene. The Leopoldlaan was temporarily closed to all traffic. The police directed traffic in the right direction.

Castle concert: Herzele swings to the hits of Base Six:

Castle concert: Herzele swings to the hits of Base Six: