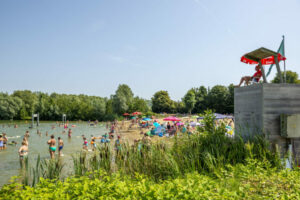 Geraardsbergen. The Vlaams Belang claims that the recreation area De Gavers is confronted with a lot of nuisance. ‘We have established that in many cases those involved are part of predominantly immigrant groups of loitering youth’, the party believes. The party therefore asks for strict measures to be taken. According to Jessie Beurms – press consultant for the province of East Flanders – the nuisance in the recreation area De Gavers is limited and there are no problems with ‘immigrant loiterers’. The Province of East Flanders regrets ‘the incorrect information’ of the Vlaams Belang about De Gavers

The Vlaams Belang van Geraardsbergen has established that the De Gavers recreation area is confronted with ‘nuisance phenomena’, such as ‘violence, minor forms of theft and/or vandalism’. “In recent years, however, the nuisance has frequently degenerated into massive fights in which people are all too often badly hurt or injured and in which major damage is done to the infrastructure,” according to Vlaams Belang. Vlaams Belang has established that in many cases those involved are part of ‘mainly immigrant groups of loitering youth’.

loiterers
According to Jessie Beurms – press consultant for the province of East Flanders – the De Gavers recreation area remains ‘a pleasant destination for those looking for relaxation close to home’. ‘Only now and then do the police have to intervene. Compared to the other recreational areas, the number of police interventions is very limited’, says Jessie Beurms.

That there are major problems with groups of immigrant youth loitering is strongly denied by the press consultant of the province of East Flanders: ‘I was surprised to read that there is a major problem in the Gavers with immigrant youth loitering and that there would be frequent massive fights. . This is incorrect information.’ According to Jessie Beurms, the nuisance is mainly caused by ‘families who go to our recreational area unprepared, only to find that there are no more tickets for the beach or the swimming pool’.

The province of East Flanders realizes that a recreation area ‘cannot do without measures against nuisance’, ‘but these must be in proportion’. ‘We do this in consultation with the local police, with whom we have good cooperation’, explains Jessie Beurms.

Measures
In the meantime – according to Jessie Beurms – the province is indeed taking its responsibility and is taking a number of measures: ‘Deployment of stewards and external security. The Police send several patrols daily, by car, by bicycle and on foot to increase visibility. The presence of police on horseback has been requested from the federal police and also happens on a few days. The police are committed to traffic controls in the vicinity of the domain. The mayor is prepared to issue bans.’

Other measures such as the use of ‘ANPR cameras have been considered, but are not applied due to the limited nuisance’. ‘Due to the limited number of interventions by the police to date, a mobile police post cannot be justified at the moment’, concludes Jessie Beurms.