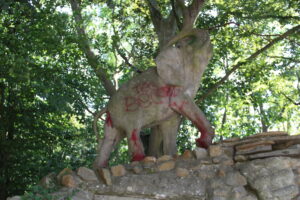 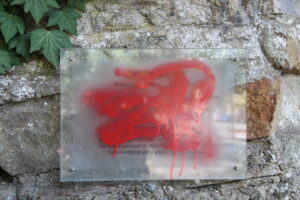 Geraardsbergen. The colonial image on the edge of the city park on the Vesten continues to arouse controversy and opposition. Opponents vandalized the statue with red paint. It reads ‘against image’. The police started an investigation. For Ann Panis – Alderman of Culture – it is pure vandalism. The ships realize that the image needs more explanation. 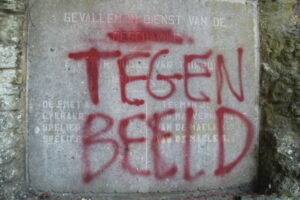 Vandals smeared the colonial statue at the foot of the steep Grupello Park with red paint. ‘Against the image’ was sprayed on the statue twice. The word ‘civilization’ of the controversial caption ‘Fallen in the service of civilization’ was also painted over with red paint. The vandals also randomly sprayed some more paint on the elephant.

Colonial monument provokes opposition
Police are launching an investigation and will use local security cameras to see if they can find out more. Ann Panis – Alderman for Culture – speaks of ‘pure vandalism’, but realizes that the image raises many questions and that more clarification is needed. “Nobody is advocating that the statue should disappear. But the current placard is not enough. We were supposed to come out with our project in the autumn, but the vandal zone is slowing us down a bit,” said Panis ships in the Nieuwsblad.

The trumpeting elephant at the foot of Grupello Park is a tribute to the deceased Congo pioneers. After the war, the city council approved the erection of a colonial monument. The statue is a creation of Theofiel L’Haire and was inaugurated on July 10, 1949. The memorial would be erected in the city park as a memorial to the Geraardsbergen residents, who fell in the service of civilization.

The image refers to the pioneers who lost their lives in Congo between 1885 and 1908. During this period, Leopold II’s acolytes went on a rampage in the Congo Free State. Millions were killed. The statue is a glorification of the colonial past. Critics point out that the frame of reference has completely changed and that this should at least be interpreted. 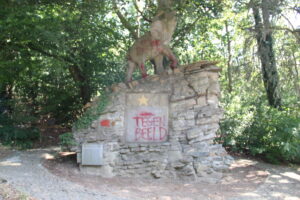 A few years ago, the city council had a sign placed to make it clear that the statue was an initiative of the colonial circle and was placed as a memorial to the deceased Geraardsberg colonials. The local government emphasized that the Elephant is not a glorification of the colonial past. But many politicians and representatives of civil society – including Emma Van der Maelen (Vooruit), Patrick Franceus (Groen), Nick Dobbelaere (PVDA) and Jimmy Colman (Open Vld) – thought otherwise and asked in an open letter ‘for also decolonize our public space’. “It’s not just about a symbol, it’s about a strong signal,” he said at the time.

The authors of the open letter not only requested a new ‘contextualizing board’ and a study day, but also a new image. ‘Such a visual response would not only throw a new contemporary perspective on Den Olifant, it would also be a strong signal of solidarity and solidarity. It would literally turn Grupello Park into an intercultural meeting place’, the signatories concluded.

Whether it will come to that is highly questionable. But the draft shows once again that the image provokes a lot of controversy.