Gilian De Wolf, born on June 12, 2008, was training at U15 of KSV Sottegem on August 9 when he suddenly fell for no reason. CPR was immediately started by the bystanders and fifth-year medical student Jerome Callebaut was summoned to the adjacent site to ensure further resuscitation. Meanwhile, the 112 was of course also called 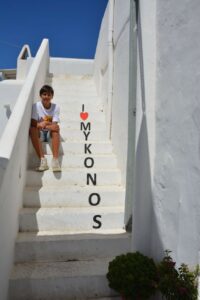 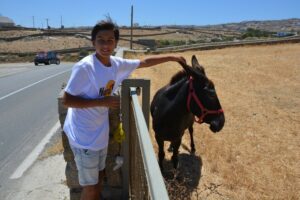 They then determined that Gilian was already quite ‘stable’ at that time.

He was immediately transferred to Saint Elizabeth Hospital where he was given the necessary care.
His condition stabilized very quickly and a transport was carried out to UZ Gent, where he is still staying for observation.

Miraculously, Gilian recovers surprisingly quickly and most likely will not sustain any damage from the event. After many tests and scans, it appears that Gilian will still need an ICD (implantable cardioverter-defibrillator). This will probably have been placed in the meantime and he can continue with his life without many problems.

Fortunately, the same student and fanion team player, Jerome Callebaut, had a defibrillator placed on the grounds last year. In an article in NUUS last year, he talked about the importance and necessity of such a device. He himself provided training to explain the correct operation. 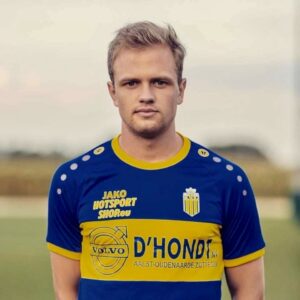 Thus Jerome tells me: “Without a defibrillator, Gilian’s condition might have been very different. The device saved the life of this young player.”

Most importantly, of course, Gilian may not be left with anything from the event and he will be completely back to normal.

And even more important for him: he will be able to play football again after the operation on Thursday.

On Papa Gino: thanks to Jerome, Gilian can move on with his life. We are so grateful to him.

And further Jerome tells me: I myself gave training to Gilian when he was in the U12. His daddy Gino was my deputy at the time. An absolute top delegate and a fantastic player.

At the time of the event itself I was able to keep calm and we did the necessary with the bystanders. The day after, however, I did get my ‘knock off the hammer’.

In the meantime I have visited Gilian and he is doing very well. That’s the most important part of the story.

This emphasizes once again how important it is that as many people as possible have mastered basic CPR training. In addition, it has also been shown that an AED device is an absolute must for every sports club. It literally saves lives, as it turned out on Tuesday. Hopefully other sports clubs will also see this and they will all provide an AED device. The price of such a device does not outweigh the price of a human life.

All’s well that ends well. But let this be an example of how important first aid and use of the AED is.