The preparation works for the site zone started yesterday 16 August and from 22 August with the construction of a separate sewerage system.

Separated sewers will be implemented in phases

Duration of the works 180 working days

Alderman Hendrik Blommaert: “Without unforeseen circumstances, the works will be completed by June 2023”

In the various streets, not only are separate sewer systems and road works being carried out, but all utility lines are also being brought underground and the public lighting is being LED lighting.

By the end of this year, approximately 95% of the public lighting in Horebeke will be LOST! Compared to the municipalities in Flanders where approximately 30% will be VERLED.

When drawing up the plans, measures against erosion of the lands from “Tissenhove molen” to the Kromstraat were also taken into account.

New dams are being built for this at the Kromstraat

Phase 1: installation of sewerage from the bottom of Fonteinstraat to the intersection with Vrijsbeke

Phase 2: construction of the Vrijsbeke sewerage and buffer basin

Phase 3: construction of sewerage at the intersection with Vrijsbeke-Fonteinstraat up to the Kromstraat intersection at the nursing home

Phase 4: construction of sewerage Kromstraat house no. 1 to the Fonteinstraat intersection

Just before the leave, the contractor Aclagro and the utility companies organized an information evening for all residents. With ample opportunity to ask questions about the works and possible temporary nuisance .

so that everyone can make the necessary arrangements

Due to the phasing of the works, traffic nuisance will be limited in time, local traffic is only allowed for residents. ” 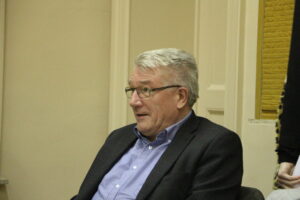 The Scheldt Offensive is staying in the Heritage House in Oosterzele

Browse through treasures at a flea market in Gijzenzele

Browse through treasures at a flea market in Gijzenzele