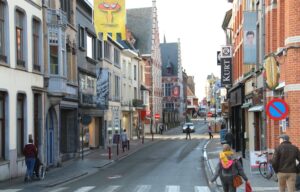 Geraardsbergen. In the center of Geraardsbergen, several thefts have taken place in recent days, including quick thefts. The police and the prosecutor’s office are scant with information because various investigations are ongoing. The police are calling for alertness and will monitor the situation more closely in the coming days. “If you notice any suspicious things or actions, do not hesitate and call 101 immediately,” the police said.

According to the police of Geraardsbergen/Lierde, there have been several thefts of various kinds in recent days in the center of Geraardsbergen, such as theft from vehicles and other thefts. Suppliers were also victims of thieves. The police of Geraardsbergen/Lierde is launching a call for alertness via the Bin-Z. ‘However, do not only be alert to what is happening in your business, also warn others, customers, suppliers, etc…. Make them aware of the fact that they must keep a close eye on their belongings and that they must always lock their vehicle properly. Do not leave any valuables in the car’, says Chief Inspector Christophe Temmerman, who is the contact person for the neighborhood information network at the Geraardsbergen/Lierde police.

‘It’s not so much about shoplifting, but we do want to involve the self-employed in order to make customers and suppliers aware of possible quick thefts. This kind of theft can happen anywhere: in a shopping street, a station environment or in a shop. It is an alarming fact in which we also involve the shopkeepers. We call for vigilance to prevent further thefts from happening.’ The police cannot provide much concrete information about the thefts because various investigations are still ongoing. The public prosecutor’s office in East Flanders is also scant with information. “As long as the investigations are ongoing, no information can be provided,” it sounds. The police will keep an extra eye on the situation in the coming days.

A neighborhood information network (BIN) is a structured collaboration between citizens and the local police in a defined area in which mutual information is exchanged under the direction of a coordinator. In Geraardsbergen there is a neighborhood information network for the self-employed. The BIN-Z now has more than 120 members. In addition to the safety aspect, BIN-Z also wants to strengthen social cohesion among shopkeepers.

“If you notice any suspicious things or actions, don’t hesitate and call 101 immediately.”