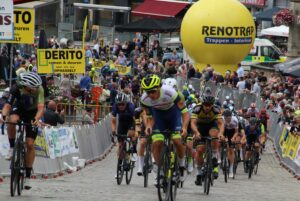 Geraardsbergen. At the end of August, it will be the last time that the Elite riders will blow up the wall for the City Award. The oldest fairground race is already being organized for the 104th time. Organizer Geert Pieraert thinks it’s been enough. This edition will be the last in its current form. The current course is being upgraded, but Geert Pieraert does not want to say anything about what it will be.

The City Prize is also difficult in the agenda. The Vuelta will be held at the end of August, which this year started from Dutch soil. There is also the Egmont Cycling Race in Zottegem. Despite the fact that in Zottegem sounding names such as Arnaud De Lie, Arnaud Démare, Jasper De Buyst, Giacomo Nizzolo … appeared at the finish line, it was not exactly the place to be. In Geraardsbergen, too, public interest in the Stadsprijs is waning. There are still some people showing up at the Market. Elsewhere on the trail it’s a lot less.

In addition, there is the Binck Bank Tour, which will be canceled this year. Since three stages of the Vuelta were held on Dutch soil this year, the Binck Bank Tour could count on little interest from the Dutch sponsor. There is nothing to say that the Binck Bank Tour will not be held again next year. Traditionally, this multi-day stage race ends at the beginning of September at the Vesten van Geraardsbergen, shortly after the Stadsprijs. The stage race is very popular and can count on a lot of interest. This has probably also sharpened the awareness among the organizers of the City Prize to put forward a more ambitious and larger cycling project.

The message has not fallen on deaf ears with the city council. Geraardsbergen has always wanted to put itself on the map as a cycling and cycling city. In the coming weeks, heads will be put together and we will look to the future with an open mind. What the new cycling project will look like will be the fruit of a working group. In the meantime, we are looking forward to who will succeed Xandro Meurisse – the winner of the previous Stadsprijs.