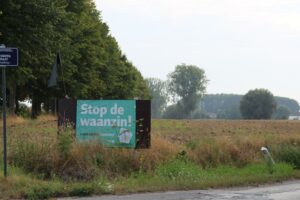 Schendelbeke. On Saturday August 27, the action committee Save the Godsbergkouter organizes a guided walk to explain to everyone what will disappear when the barracks and the training area actually come to Schendelbeke. With this, the action committee is the kick-off of a political autumn that could turn out to be turbulent. ‘With the next municipal elections it will certainly be an election theme’, it sounds combative.

On July 20, the core cabinet decided that the barracks will be located in Geraardsbergen. ‘Geraardsbergen is the best option. It is the intention that all kinds of business activities will also arise in the vicinity of the barracks’, reported the VRT. The action committee Save the Godsbergkouter reacted very disappointed but also combative: ‘We are combative. We will do everything we can to prevent and prevent this from happening legally 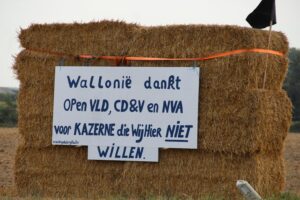 dispute. This will be a procedural battle that will take years.’

‘Belgian horse trading’
The Open Vld, the CD&V and the N-VA are fully behind the project. Parties such as Groen and the PVDA oppose the arrival of the barracks. The Vlaams Belang recently distributed a press release in which the party criticizes the backroom politics in this file. Moreover, according to the Vlaams Belang, this file has a sour community aftertaste: ‘After all, the PS now receives half of the jobs in the Schendelbeke barracks, in addition to the barracks in Charleroi to which they are entitled according to the usual Belgian horse trading. Geraardsbergen is located next to the language border and a bilingual military unit can be housed in the new barracks.’ According to Municipal Councilor Hans De Gent (Vlaams Belang), we are not only losing a lot of good agricultural land, but we have to give up half of the jobs to ‘the Walloon unemployed’.

According to Groen, he is against the arrival of the barracks and argues that the city should develop a sound housing policy. ‘A housing policy should be aimed at the needs and not at the wishes of the project developers,’ said Patrick Franceus, chairman of Groen.

Luc Swartebroeckx, the chairman of Weerbaar Geraardsbergen vzw, also made himself heard: ‘A remarkable finding when one considers that the CD&V is already making the effort in the world to present itself in the nitrogen dossier as the party of farmers. That it is precisely the party of the Boerenbond now rejoicing in the press that 70 hectares of valuable agricultural land are being taken from the farmers for the concrete of an army barracks: it must be unique.’

But Paul Pardon (CD&V) also had huge questions about the arrival of the barracks in Schendelbeke during the city council on 7 June. “I hope that this file will be reviewed at a higher level and that alternative solutions will be sought,” he said during the council meeting. 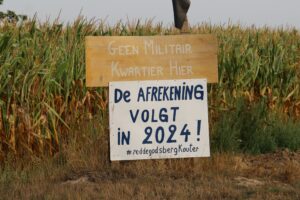 In the coming months, the discussion will mainly focus on where the barracks will be located. A Provincial Spatial Implementation Plan must be drawn up. It will indicate where the barracks will be located. For Mayor Guido De Padt, all possibilities are still open. The residents will have a say and will decide together with, among others, the municipal council what the optimal location will be.

Various locations are reviewed. Certain councilors put forward the Unalsite in Overboelare as one of the alternatives. But whether this is realistic is highly questionable. For example, there were recently plans to build a shopping complex on the old factory site between Dender and Gaverstraat. The project was given a red light because the site is prone to flooding. In addition, there was a fear of a mobility infarct. Later plans to build 95 units for craft activities on the site were also discarded. How will things be different for the possible construction of a barracks on this site?

Other locations are reviewed, but the extent to which these alternatives are realistic is highly questionable. Finding a location of this magnitude is no small feat. We are not even talking about the mobility issue or other factors related to the allocation of the location. There is therefore a very good chance that the Godsbergkouter will become the location.

The action committee Save the Godsbergkouter is already aware that it will be a lengthy procedural battle. The action committee has not been idle in recent weeks and has taken advantage of the holiday period to prepare well. ‘With the next municipal elections it will certainly be an election theme’, it sounds.

The Godsberg walk starts on Saturday 27 August at 2 p.m. at the Godsbergkouter.