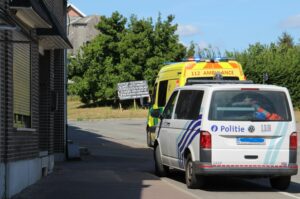 Schendelbeke. When the emergency services were standing in front of a closed door, the Geraardsbergen/Lierde police forced their way into a house through the back door on Sunday afternoon, August 28, 2022.

On Sunday afternoon, August 28, the 112 was called to a house in the Moenebroekstraat in Schendelbeke to provide assistance. When the ambulance arrived, the emergency services were standing in front of a closed door. The police of Geraardsbergen/Lierde were called in. But the door also remained closed to the police. The officers eventually forced their way through the back door of the home. A benevolent neighbor granted access. Moments later, the emergency services were able to do their work. A mobile emergency group was called in. The patient was transferred to a hospital.

Suspect stabbing remains arrested and appears before the Council Chamber