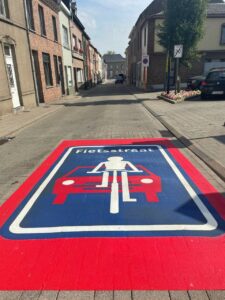 Geraardsbergen. Local Administration Geraardsbergen is fully favoring cyclists during this policy period. The introduction of bicycle streets and bicycle zones fits in with the vision of the bicycle policy plan. Cycling zones will be set up in Nederboelare and Overboelare from 1 September 2022.

The trial period was evaluated by means of a survey. Based on the results of this survey, the city council decided to change the traffic situation in Reepstraat from 1 September 2022 as follows:

overboelare
In Overboelare, Verbondenstraat, Burgstraat, Kloosterstraat and Pol Antheunisstraat will be converted into a bicycle street. This bicycle zone then forms the connection between Goeferdinge, Overboelare (bicycle street Burgstraat) and the center of Geraardsbergen via the functional bicycle connection along the Dender. In this way, a connection is created from Molen-te-Veel, via Hogeweg, Vervangenenstraat, Burgstraat and Pol Antheunisstraat from the sub-municipalities of Zarlardinge, Goeferdinge, Overboelare and the center of Geraardsbergen. The zone connects to the towpath along the Dender.

“By setting up these two new cycling zones, we want to improve the cycling climate in terms of accessibility and safety. In this way we also hope to encourage children to cycle to school via a safe route,” says Alderman of Mobility Fernand Van Trimpont. Cars are welcome in a cycling zone, but they are not allowed to overtake cyclists and there is a maximum speed of 30 km/h. A bicycle zone is recognizable by the red markings and traffic signs that demarcate the bicycle zone.

The markings will be applied in the two new zones at the latest on Tuesday 30 August.

The following rules will apply in the cycling zone from 1 September 2022: