According to the VVSG, there should be no McDonald’s on the Astridlaan 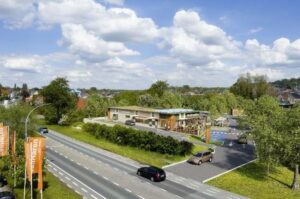 Geraardsbergen. The Flemish Association of Cities and Municipalities (VVSG) calls at the start of the new school year to refuse as many fast food restaurants and sweet shops as possible near schools. There are now many more near schools than in 2008. On 13 June, the city council granted an environmental permit subject to conditions for the construction of a McDonald’s on the Astridlaan, right next to the GO! Atheneum. According to the VVSG, this should be banned in the future.

For the GO! atheneum Geraardsbergen, there are no fewer than 2 sweet shops, 5 local supermarkets, 13 fast food restaurants and 3 supermarkets within a radius of 1 km. That is almost double in comparison with 2008. At the GO! Primary school Dender in the Victor Frisstraat there is none of this in the area.

Increasing fast food trend
Things get even more out of hand at the Vrije Basisschool ‘t Karmeliet: there are no fewer than 6 sweet shops, 8 neighborhood supermarkets, 19 fast food restaurants and 2 supermarkets within a radius of 1 km. The big difference is that primary school pupils are not allowed to leave school during the afternoon, while secondary pupils are allowed to do so. At noon they can turn to fast food, supermarkets… For the schools in the center of the city, the number of cases increases sharply. Sint-Catherinacollege has no fewer than 30 fast food points within a radius of 1 km, which is 10 more than in 2008.

According to Sciensano, it is no coincidence that there are so many such things near the schools. “It’s a disturbing trend.” A higher concentration of unhealthy food has a negative effect on BMI. Sciensano is calling for something to be done about it. In South Korea it is illegal to offer fast food within a radius of 200 m from a school.

According to the Flemish Association of Cities and Municipalities (VVSG), it is impossible to refuse a catering establishment with unhealthy food near a school, because then all catering establishments must be refused, but the VVSG asks for a legal framework that will allow no fast food to be used. in certain neighbourhoods.

On June 13, the city council granted an environmental permit subject to conditions for the construction of a McDonald’s on Astridlaan. The arrival of the fast food chain can count on a lot of skepticism. The fast food factory will be next to the GO! atheneum, which will not promote the health of school-age youth.