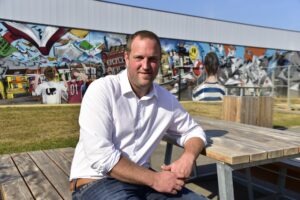 Geraardsbergen. Director Brecht Persoons of the GO! Atheneum Geraardsbergen opts for a new challenge. ‘He leaves his successor with a school with more than 950 students and the broadest offer in the region. The current success of the school is a result of the fact that the atheneum offers education that is both accessible and high-quality at the same time,’ says Frederick Van Acker, GOK teacher and communication officer.

Brecht Persoons came to teach in the atheneum of Geraardsbergen in 2009. He taught Dutch and German until 2016. Then he became a policy officer and in September 2017 he became director of the school. Since Persoons came ‘from the classroom floor’, he knew very well what students and teachers expect from a management. His period as director was therefore characterized by participation and teamwork. His main goal was to offer education that is both accessible and high-quality at the same time.

‘An era ends with the departure of Brecht Persoons. At the same time, it is the start of something new. Persoons has put a lot of effort into innovation and his successor will be able to build on that’, explains Frederick Van Acker. The major renovation of the oldest part of the campus will be completed by the end of the school year. From the autumn, students can already move into a finished part. They will be ultramodern, flexible learning spaces in which self-directed education will be provided. It is the umpteenth step being taken in the modernization of teaching in the Geraardsberg atheneum.

International appearance
Brecht Persoons is also the spiritual father of the agora class, a reference in Flanders and far beyond with regard to innovative, self-directed education in the Humanities Sciences course. Every school year, dozens of principals and teachers from home and abroad come to see the agora class for inspiration to modernize education in their respective schools. But many other innovative projects were introduced under Brecht Persoons: in science, language, project general subjects and so much more. He started from the ‘oil slick principle’ in which teachers ‘fire’ each other in order to also work innovatively in the classroom.

‘The fact that the atheneum of Geraardsbergen, together with the middle school, was designated by the Flemish government as an ‘anchor school’ for the education of cognitively strong and gifted students, is also largely due to Persoons’ merit. After all, he started the Delta operation in 2018. This highly gifted work is highly regarded within the Flemish educational landscape. Persoons saw it as a privilege to be able to organize such a wide range in his school’, adds Frederick Van Acker.

‘He therefore paid special attention to technical and vocational education, despite his profile as a linguistic and local researcher. Persoons is a bookworm who at the same time likes to roll up his sleeves and who is very well versed in technical matters and the practical part of education. It was a real pleasure for the technical advisors and the practical teachers to work with him.’

Fine-tune and streamline
Behind the scenes, Persoons also spent a lot of time streamlining and fine-tuning the complicated and cumbersome organization that is a large school. In administrative and financial terms, he has prepared the atheneum of Geraardsbergen for the future.

‘The school team deeply regrets that the headmaster is leaving the school, but of course wishes him every success in his new job. The entire team would like to thank him for the good cooperation and the great things he has achieved together with them. Meanwhile, deputy director Sonny Van den Stockt, together with middle management, will take over the day-to-day management of the school. She is assisted in this by the general director of School Group 20, Isabelle Truyen.’