VIDEO: KSV Sottegem with bravado in first game past Borsbeke

Both teams could not have dreamed of a better poster. The opening game between the two teams that colored the 2nd provincial series last season. TK Borsbeke deservedly became champion and KSV Sottegem then passed through the final round. Both with a cartload of points.

And just those two teams faced each other again tonight.

The supporters of Borsbeke were in any case sure of their case. They would win by big numbers. Here and there I even heard 0-7 as a result.
It must be said, even chairman Didier De Baere was not sure of his case and feared a punishment.

Technical director Rojdi Ben Ahmed, together with his side kick André De Blanc, talked about the fact that their team might not be 100% physically yet and that they would also have to undergo the technical ingenuity of Borsbeke. But also that they would play football like KSV Sottegem, with a heart and with commitment. The fans would take care of the rest. 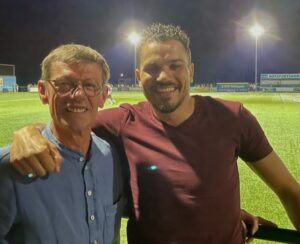 But the KSV players were not aware of all those worries and they wanted to play football the way they are used to.

No less than 650 supporters were looking forward to it and created a lot of atmosphere.

The start of the match seemed like a dream for Sottegem. They flirted with the opening goal after 15 seconds, which unfortunately was missed by Jasper Heymans.

On the other side, Schamp was shown a first yellow card by the well-leading referee, due to too much protest.

And again, after 7 minutes, Sottegem had the chance to open the score through Klaas Janssen, but his shot went over the bar.
Afterwards, Borsbeke restored the balance and Daan Ronse had to make a class save to prevent the 0-1.
The two goalkeepers both put in a remarkable performance in the game and needed some nice saves to keep the score at 0-0.

Borsbeke took full charge and Sottegem had to get back on track. Matthias Schamp hit the post and goalkeeper Ronse had a rabbit’s leg in his back pocket. Borsbeke brought Sottegem out of balance with well-maintained football, so it was a matter of raking in to keep the zero on the board.

At the end of the first half it could have been 2-2 on the board, but it still remained 0-0.

In the beginning of the second half we had to brave two power cuts, but then Sottegem took the game resolutely in our hands.

The much-feared Borsbeke barely managed to put together a decent attack.

And just like that, KSV Sottegem takes the lead. At least that’s what it should have been. After a well-tensioned attack, the ball comes through a strong Jarne Van Iseghem to Heymans’ feet, who unfortunately leaves the empty goal empty and the ball overshoots high.

But postponement is not an adjustment and in the 70th minute Robin De Beck can bring the 1-0 on the plates with a nicely placed header.

Great joy, of course, with the supporters who see that their team can physically put their foot down next to that of Borsbeke.
Borsbeke wants to equalize but at the same time seem a bit tired. The spunk was a bit off, if it was there at all in the second half.

KSV defends its lead almost effortlessly and after some shivering in the last minutes they take the victory over the line.

Many happy faces at KSV Sottegem who deserve the match wins.

For Borsbeke a sour defeat that they had not counted on.

The beautiful football they brought stranded time and again in the large rectangle where the strikers did not give home.
Their supporters ran off with their tails between their legs. 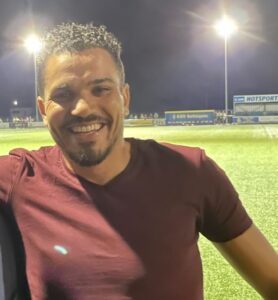 Rojdi Ben Ahmed told me after the game that he is proud with the first victory, “the team has won and the team has fought for every morsel of ground”. “Due to injuries, we were not completely as planned today, but the boys showed what I expected from them”.

André De Blanc was especially happy with the team’s commitment and physical preparedness, “that way we will win a lot of points this season”. They both underline that the many supporters are very important for the entire KSV event. “They are there like a 12th man, every time”, De Blanc explains to me. A standout? I asked him. “The whole team, the whole is our strong point,” he says with a laugh.

However, I would also like to mention old age dean Bernd De Coene who always leads the way and controls the midfield like a young foal. 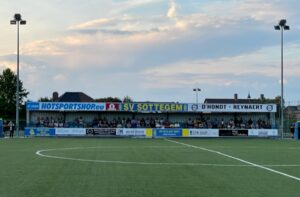 What is certain is that KSV Sottegem has started the season well and can look forward to the next games with confidence.