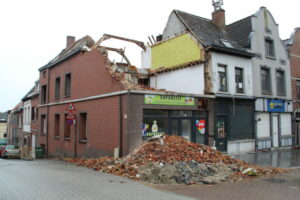 Geraardsbergen. An unsafe situation has arisen as a result of a lengthy file about the demolition of a house on the corner of Markt and Buizemontstraat. Councilor Stéphan Bourlau (Het Alternatief) inquired during the city council on 6 September about the state of affairs in this file and quoted from an article by Nuus a statement by mayor Guido De Padt (Open Vld) during the city council on 5 July. The mayor then said that Nuus put words in his mouth. This is patently incorrect. Everyone can consult the audio report of the city council of 5 July on the site of the city of Geraardsbergen.

As a result of the demolition of a house on the corner of the Markt and the Buizemontstraat, the works were halted because there was a danger of collapse in the adjacent houses. As a result, the Market on the corner of Buizemontstraat has been closed since the end of April. The owners of the houses involved are involved in a civil dispute and a solution is not in the offing. In the meantime, the unsafe situation continues and the half-demolished building is accessible to children playing, among other things.

Pertinently incorrect
Council member Stéphan Bourlau (Het Alternatief) asked mayor Guido De Padt (Open Vld) in connection with the unsafe situation during the city council on 5 July. Mayor Guido De Padt then replied: ‘The demolition of the house has started, while we are of the opinion that the stability file is insufficient. When it was established that the demolition threatened another house with the danger of collapsing, the demolition was halted.’ In the meantime, the situation has not changed.

Mayor De Padt then said that Nuus had put words in his mouth. He literally said, “Words were put in my mouth.” This is patently incorrect. Nuus relied on the audio reporting of the city council of July 5, 2022, which is available on the website of the city of Geraardsbergen. If you want to find out what Mayor De Padt has said, you can consult the audio reporting. You will notice that Nuus has correctly quoted mayor Guido De Padt. ( see https://channel.royalcast.com/geraardsbergen/#!/geraardsbergen/20220705_1 0.38.30)

Impediment to demolition of Markt building causes dissatisfaction. Solution not yet in sight.

37-year-old suspect of several burglaries arrested and brought before