1,665 reports of litter and fly tipping lead to 33 GAS fines 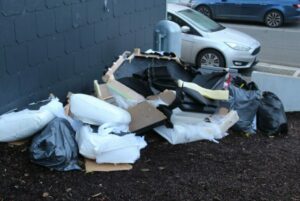 Geraardsbergen. In 2021 and 2022 together, there were 1,665 reports of litter and fly dumping in Geraardsbergen. That ultimately led to 33 GAS fines, said Alderman for Sustainability and the Environment Stephan De Prez (Open Vld) at the request of councilor Hans De Gent (Vlaams Belang). First of all, a GAS file can only be drawn up if there is a suspicion of the perpetrator. Moreover, it is primarily the intention that the city services work to raise awareness, Stephan De Prez adds.

In 2021, according to alderman Stephan De Prez (Open Vld), there were 900 reports of illegal dumping and litter. “The number of GAS files that were drawn up in 2021 was 166. This resulted in 41 sanction files, which ultimately resulted in 28 GAS fines,” reports ships De Prez. To date, there have been 765 reports for 2022. 61 GAS files were distilled from this, which finally resulted in 19 sanction files, 13 of which are ongoing. ‘We have imposed 5 fines to date’, says Alderman Deprez.

In order to be able to process the enormous amount of reports, some remediation will be carried out. “From now on, a GAS file will be drawn up if there is a suspicion of a perpetrator,” the ships said. Stephan De Prez points out that it is primarily the intention of the city services to raise awareness.