Daniel (76) was brutally knocked over and seriously injured. No trace of the culprit. 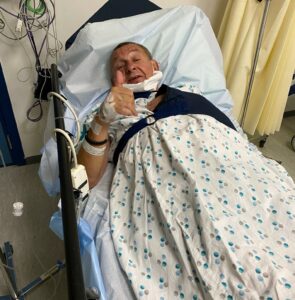 Geraardsbergen. On Friday, Daniel Van Droogenbroek (76) was brutally hit by a man with an electric bicycle or moped during his daily walk in De Gavers and suffered a complicated fracture of the upper arm. The Geraardsbergen resident lost consciousness. After much effort he reached the exit. Finally, Daniel was helped by a kind man.

Daniël Van Droogenbroek (76) was brutally hit by a man with an electric bicycle or a moped during his daily walk in De Gavers on Friday 9 September between 5:00 pm and 6:00 pm. Daniel landed on the ground, but still saw the man drive on and raise his middle finger. Due to the violent collision, Daniel made a nasty fall and broke his left upper arm. He suffered a compound fracture and also injured his left eyebrow and chin. The violent blow and the pain made him lose consciousness.

Conny is a nurse and knew how to deal with her injured husband. She brought him to the AZ Sint-Elisabeth in Zottegem, where he will be operated on his upper arm today. Daniel and Conny have yet to recover from the incident and the emotions, but are determined to file a complaint with the police soon. According to Daniel, the aggressor was wearing a yellow rainproof vest at the time of the incident. Anyone who can provide more information about the perpetrator or the incident can contact the Geraardsbergen/Lierde police. (https://www.politie.be/5428/ )

Conny and Daniël want to thank the friendly, helpful man along this way.

Next Sunday: car-free Sunday in Zottegem