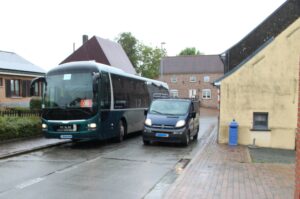 Schendelbeke. On Saturday morning, September 17, there was a collision between a bus and a car in Ganzestraat. It was only material damage. The police were mobilized to complete the documents. Due to the works on the Aalstsesteenweg, there is a lot of through traffic in the Ganzestraat. The much too narrow street and the parked cars cause a lot of traffic misery. ‘Every day this leads to dangerous situations. It’s a wonder there haven’t been more accidents already,” said an older woman.

Saturday morning 17 September a traffic accident occurred in the Ganzestraat between a bus and a car. Due to the works on Aalstsesteenweg – from the roundabout on Moenebroekstraat to just before the intersection on Varingstraat – there is a lot of through traffic to Moenebroekstraat. This leads to traffic misery both in Kulvestraat and at the beginning of Ganzestraat.

A lot of cars, but also buses and trucks race through the Ganzestraat. At the beginning of the Ganzestraat there are a lot of cars parked. Traffic coming from both directions has to slalom its way through the many parked cars and the widened or not wide footpaths. This morning a bus and a car passed each other in a tight bend. “There was not enough space to maneuver properly,” the bus driver said. The bus and the car collided. There was only physical damage.

Due to work on the track, there are no trains to both Zottegem and Denderleeuw. Replacement buses are called in. One of the replacement buses collided with a car this morning. “This street is too narrow to handle a lot of traffic,” the bus driver said. ‘Moreover, there are far too many cars parked. It would be much better if one-way traffic was organized for the time being.’

Another resident asks how long this situation should continue. ‘Every day this leads to dangerous situations. It’s a wonder there haven’t been more accidents. ‘Why are they temporarily not organizing a parking ban? In the Moenebroekstraat there is a large parking lot where residents can park their car temporarily. This traffic misery causes a lot of stress and discomfort for the residents’, responds an older woman.