Special exhibition by Luc Standaert in his own studio 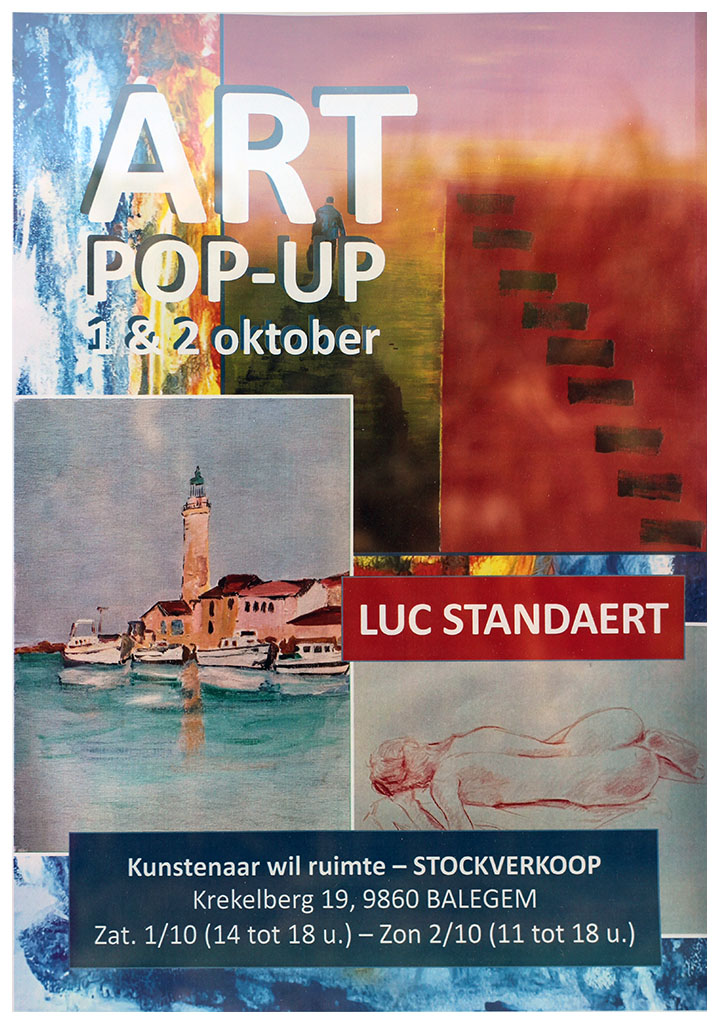 An absolute must. On Saturday 1 and Sunday 2 October you can view a special exhibition by artist Luc Standaert in Balegem, Krekelberg 19. He exhibits in his own studio. You can go there on Saturday October 1 from 2 pm to 6 pm and on Sunday October 2 from 11 am to 6 pm. Don’t miss this unique expo. Luc Standaert has built up an international reputation. Rave reviews. After Basel, Berlin, Firenze, Lille, London, New York, Paris,… versatile artist Luc Standaert exhibits in his very own Balegem, all of the places.

He followed an artistic education at Ghent University Sint-LucasInstitute, specializing in scenography (Monumental Arts). He got it from Erik Boone, Jean-Pierre Maes and the Romanian Andreï Ivaneanu. Afterwards, a capricious artistic path followed: from scenographer over artist manager to music publisher and now a painter, albeit multidisciplinary. Both as a scenographer-director and as a music publisher, he is and was already very active and successful both nationally and internationally.

For about ten years he has been active as a draftsman, painter and sometimes etcher. Since 2006 he has also ventured into larger installations and other multidisciplinary art forms. Thematically, a very distinctive use of color is striking in his early work, and this intense use of color is often continued in recent work. Sketches made on site, their own photo archive and other visual material are often the basic sources.

His work attempts to capture the unity between man and the space surrounding him and often contains a critical approach to the human condition. His more recent work deals with human freedom (or lack of it).

In 2011, his first art book “Destination Unknown” (publisher Kramat) was published, a precursor to his selection for the 2011 Biennale in Firenze (Italy).

He was also the driving force behind the Artua project (Snoeck Publishers), in which many well-known names participated, including European president Herman van Rompuy.

The New York art critic John Austin wrote of Luc’s works: “Luc Standaert’s paintings come at you almost delirious. They thrash you, as it were, or take you in, and after a while even a rushed, restless and uncomfortable feeling will spread over the work. This is the result of the artist’s pictorial intelligence, recognizing the value of spatial and temporal complexity.” (…)

“Works such as Human Factor, Identity, Fata Morgana, Determination, seem to suggest that there is an otherworldly world that not only coexists with those of empiricism and intellectualism, but is equally substantiated by everyday reality.” We should be quite proud of this homegrown artistry. A little chauvinism is allowed. We have not yet seen or heard the last of Luc Standaert. Info: Luc Standaert, 0497 / 52 71 88. (mvdv, photos ls, ddl)