After 60 years, Bloemen Iris closes its doors. ‘With pain in the heart’, Marian Borremans knows 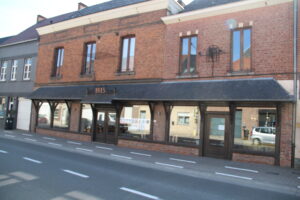 overcrowded. After 60 years, Bloemen Iris in Overboelare closes its doors. ‘It is with regret in the heart,’ Marian Borremans says, ‘Unfortunately, due to medical reasons, we have to close our flower shop.’ Iris Bloemenwinkel was an anchor point in Overboelare. ‘A lot of customers have been coming here for years and became friends.’ Moreover, the cozy and well-functioning flower shop on the Groteweg is the birthplace of the renowned artist Michael Borremans. The property has already been sold, but what will happen to the house remains a surprise.

Marian Borremans (62) and Danny De Coninck (63) have run Bloemen Iris in Overboelare together for 37 years. The case was firmly anchored in Overboelare’s social life. This was not only due to the love and passionate care for flowers and plants, but also to the warm appearance and social involvement of the family. Marian’s parents – Jules Borremans and Cecile De Nayer – started the shop in 1959. ‘Initially part of the business was a clothing store, which my mother’s sister ran. My aunt and uncle left for Congo. My mother was newly married and took over the business. My mother was very interested in flowers. To continue her education, she followed a course at the Horticultural School in Melle. Initially she combined the clothing store with the sale of flowers, but it did not take long before the sale of clothing had to make way for flowers and plants’, Marian testifies.

The flower shop
The store has grown organically. At the end of the seventies, the store was thoroughly renovated by the construction company Borremans-Cock PVBA. Marian and Danny initially had other plans. The newly married couple lived in Destelbergen. There they had the bright idea of ​​ordering flowers at home. They worked together with thirteen flower shops. ‘The idea came from the Netherlands, but it didn’t work out in Flanders. The Flemish are a lot more reserved than the Dutch’, Marian knows. ‘We couldn’t live off it, but at my house there was an important change. Due to personal circumstances it was no longer appropriate for my mother to run the flower shop in Overboelare. My father took early retirement. As a result, my mother became head of the family, which meant that my father would retire less.’

At that time, Marian and Danny were looking for a flower shop near Geraardsbergen to take over. ‘My mother was now 52 years old. You should not underestimate how much work it takes to run a flower shop. We then made a virtue of necessity and took over the flower shop from my mother in 1985. Initially, the couple lived in the parental home. The house is big enough. ‘We have partly renovated the house. After all, we bought my parents’ house in 1991.’

Medical reasons
Marian and Danny kept the business open until Saturday 24 September. ‘That makes 37 years. My mother ran the flower shop for 23 years’, Marian recalls. The store will close after 60 years. ‘We are definitely putting a stop to it. Many customers reacted with disbelief. My medical situation no longer allows it. Danny has a harder time putting a stop to it. But running a flower shop requires a lot of energy. He can’t possibly do that alone.’ A lot of customers come by to say goodbye. ‘We take a lot of good memories with us,’ says Marian.

‘Our business has always been successful. Despite the fact that we had to close the store for several weeks, the corona year 2020 was a great year for us. It seemed as if the people had a lot of damage to make up for. Flowers and plants were bought in abundance. The store was running so well that I couldn’t handle it anymore.’ It is with heavy hearts that Marian and Danny say goodbye to their business. The property has been sold. What will happen to the house remains a surprise for now.

Marian testifies that the energy crisis has not been the deciding factor, but she does not deny that the flowers are becoming very expensive. ‘I’m glad I don’t have to pass the expensive prices on to my customers’, Marian breathes a sigh of relief. ‘I would not be able and dare not charge the prices to my customers. A beautiful, high-quality rose currently costs €3 to €4, while we used to charge a maximum of €1.5 for it. More than ever, roses are becoming a luxury product.’

A piece of history
After many years of hard work, the couple takes it easy. Sixteen years ago, the couple moved to Galmaarden. Danny is going to do another part-time job. ‘I’m going to enjoy my grandchildren. I’ll finally have time for the things I’ve always wanted to do,” Marian lets out. Marian and Danny have two daughters and four grandchildren together. ‘All four of them attend the Kloosterstraat school. They are the apples of our eye. Now that we have more time, we’ll be able to enjoy it even more.”

With them, another piece of history disappears in Overboelare and public life becomes more monotonous again. ‘In all those years a lot has disappeared in Overboelare. Many cafes and shops have closed their doors. The fair of Overboelare has also disappeared. The village council has also put an end to it. Of course we still know a lot of people, but the contacts have decreased. Public life has come to a standstill to some extent.’

Marian and Danny take some souvenirs with them. ‘My mother is now 15 and my father has passed away for 5 years. My mother was very creative. Drawing and painting was her passion. Many of her works hang in our house. But the most important souvenirs are in our hearts.’ It is undeniably also the parental home of the renowned and internationally known painter Michael Borremans. “He was here recently to say goodbye to the house. He has a hard time with the thought that the building may be demolished,” Marian testifies. The house has been sold and will be emptied in the coming weeks. This concludes an important chapter of the family history.