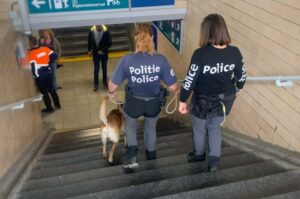 Geraardsbergen. The Geraardsbergen/Lierde Police held a large-scale control action in the Geraardsbergen station area on Friday 23 September. In addition to deploying its own inspectors, the corps could also count on people from Securail and 2 drug dogs accompanied by the Federal Police. Two people were effectively arrested for drug trafficking. In addition, 10 police officers were drafted for possession of narcotics and a vehicle was seized for irresponsible driving and alcohol intoxication on the part of the driver.

The checks in the station area took place at various times between 3.30 pm and 11 pm. The police checked for nuisance, (itinerant) perpetrators and drugs, the latter with reinforcement of drug dogs from the Federal Police. The emphasis of the action on Friday was mainly on school-aged youth who travel by train. With this, the police want to give a clear signal to young people that drug use and dealing are not tolerated and that they can be checked at any time. 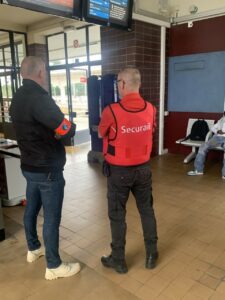 Chief of Police Patrice De Mets explains: “A control campaign with a drug dog mainly has a signaling function. Essential pillars of a good drug policy include prevention, early detection and assistance. In the first place, we want to remind young people that drugs are dangerous and inadmissible. By making them realize that they can be subjected to a check at any time, we hope to have a dissuasive effect.”

10 people in possession of drugs and 2 people arrested for drug sales
The action was twofold, focusing on both prevention and repression. In the first part – which took place at the time of the peak hour trains – commuters in the station were led to a central point, where they were checked by the drug dog. 58 people were indicated as positive by the sniffing four-legged friends. A further search by the inspectors yielded 10 charges for drug possession and 2 charges for drug dealing. Both dealers were arrested.

Arrest sent person + vehicle seizure after irresponsible driving
At nightfall, the police paid specific attention to train passengers coming from Ghent, Ath, Denderleeuw and Brussels, and car traffic in the station area was also monitored. The inspectors found 2 people who had been warned, one of them was a member of a nuisance gang and was arrested.

One driver was pulled from traffic for irresponsible driving. This person also passed a positive breath test and his vehicle was impounded.

In addition, 4 police reports were drawn up for persons who did not comply with their conditions, a person was caught with a prohibited weapon and 1 report was drawn up for disturbing public order.

Finally, one could catch a driver who was driving with a driving ban and who also passed a positive drug test. As a security measure, the person’s vehicle was immobilized.

More similar promotions
The results clearly show that control is needed. Such actions are therefore also planned in the future. With this, the Geraardsbergen/Lierde police want to emphasize that nuisance and drugs remain important points of attention within the regular operation of its force. A signal that mayors De Padt and Soetens also support: “School-age youth is a particularly vulnerable target group. It should come as no surprise that there are also young people among them who use drugs at times. Young dealers also go to school. We do not bury our heads in the sand for this problem and that is why we continue to invest in efficient prevention and control!” it sounds.