After the approval of the agenda, there were a lot of questions from the Brakel opposition during question time.

Hedwin De Clercq (Vooruit) kicked off with the question whether Brakel was approached to enter into a merger. De Clercq would have picked up on this at a higher political level.

Mayor Stefaan Devleeschouwer (Open Vld) once again showed that there are currently no talks with a neighborhood municipality. “We have not yet been approached and the question is whether this is still so interesting in such troubled times.”

Playground in Elst – no land

Bart Morreels (CD&V) had a question about the Noordhoek district in the Elst district. “Years ago there was a ‘promise’ about the possible creation of a meeting place or a playground on this site. Does it stick to plans?

Mayor Stefaan Devleeschouwer replied that the municipality does not have a single piece of land in this district. It is therefore not immediately possible to realize a playground. Suppose you did find this – which resident would like to have this next door? Promises have never been made.”

Savings – Streetlights may be out for a few hours soon

Veronique Lenvain (Vlaams Belang) asked how savings can be made in this energy crisis.

Stefaan Devleeschouwer said that every citizen can do something. For example, it is starting to use energy-saving light bulbs and to raise awareness about temperature regulation. The Association from Flemish Cities and Municipalities (VVSG) has offered as many as 10 to save. For example, we have an agreement with grid operator Fluvius to cut back on public lighting – eg deaf people between 11 p.m. and 5 a.m. – which still needs to be worked out with the maintenance of lighting at the intersections.

It is not for nothing that things are put on hold – we are working on a savings round – the cost price of the new swimming pool is much more than estimated. This means that we have to make a serious effort.

There is still the CPAS safety net for people who have major problems. ”

Jan Haegeman (N-VA) said that this does not make much difference to safety whether the street lighting remains on or not.

Do not raise taxes

Jan Haegeman (N-VA) also took it seriously that possible savings were spread through the press before they are discussed during the council.

Mayor Stefaan Devleeschouwer said that no one has been to the press with proposals. Only we were once invited to a chat box. Things are being put on hold in these exceptional times and we have to find money to save. This does not mean that we will increase the tax burden, added alderman Peter Vanderstuyf to that.

Alderman Peter Vanderstuyf said that relaxation is being introduced to the number of parking spaces per home. This was previously 1.5 and is now reduced to 1. More details about the demarcation center will be brought forward on November 29 – middle class congress.

Jan Haegeman also had comments about the further apartmentization of the country. Recently, the project – the vineyard was presented along the Ronsesestraat with luxury apartments.

Alderman Peter Vanderstuyf made it clear that the project is in order and that no real high-rise projects are possible in Brakel.

Municipal councilor Hedwin De Clercq (Vooruit) had questions about the Hoppinpunt that was inaugurated last week along the Spoorwegstraat. He established whether the shared cars are actually being used. I’ve been asking for numbers on this for several months and still haven’t gotten it. “They’re not going to say that they can’t give those figures.’ I have noticed that in recent projects a lot of De Lijn boarding places have not been adapted for the disabled. What is the cost of this Hoppin Point?

Ships for mobility Sabine Hoeckman said that this Hoppin point should contribute to basic mobility. The project cost Brakel 14,000 euros. The column where a lot of information can be found costs 7800 euros.

As for the shared cars – these are not cars purchased by the municipality. We are going to make people aware of these forms of mobility and I may soon be able to say how much these cars are used.

Hedwin De Clercq was not apprehensive about this and said that the mobility officer should be able to say how many times these cars are used. “If that also has to take months.”

Hedwin De Clercq thanked him for that because that is where photos are taken.

Bart Morreels (CD&V) had questions about the asphalting works in Brakel. An example of this is the Kraaiestee in Michelbeke, which has been milled for weeks – months, which is very annoying for road users.

Sabine Hoekcman replied that the contractor has exceeded his term and that he may have started this week.

Veronique Lenvain (Vlaams Belang) said that there is a lot of dissatisfaction in Kimpestraat because people drive too fast. Ships Sabine Hoeckman said that measurement results prove the opposite and that only 0.04% are driving too fast.

Sabine Hoeckman: “traffic cushions were installed along the Leizemooie to moderate the speed. Here 78% drove too fast.”

(Editor: Opbrakel has been under heavy pressure for several months due to the major diversions – Ronsesestraat works, which has consequences on the smaller roads.)

Lien Braeckman (CD&V) asked about the opening date of the new swimming pool. It is difficult for schools to plan ahead. Will there be an overlap period when both pools are open?

Alderman Marc De Pessemier could not yet say when the new swimming pool will actually open. Will we get the key in January – this will become clear in the coming weeks. The pool is waterproof. There will be no transitional period when both baths are still open. Keeping a swimming pool open is not a profit but costs a lot per month.

(Edr teething problems with a new project can never be ruled out. For example, there was a major problem in Eeklo where tiles came loose in the new swimming pool and there were problems with the roof in Oudenaarde)

The municipality of Brakel used to offer a call car. Today we see that this no longer works, says opposition councilor Hedwin De Clercq. “Mobility is deteriorating – there are also interventions with the Belbus.”

Alderman for social affairs Marijn Devalck: “There is a lack of volunteers. These are hard to find today. In 2013, there were still 10. Corona has stopped everything and a lot of volunteers don’t like to drive at all hours and days. This initiative is therefore not workable at the moment. There may be a restart, but we cannot promise this.” 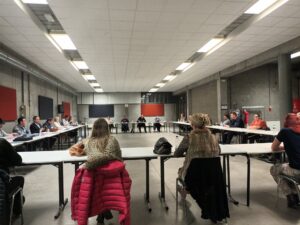