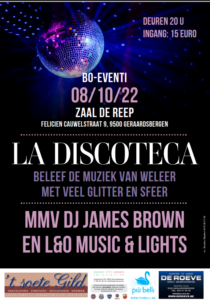 Geraardsbergen. On Saturday October 8, BO-EVENTI organizes its first disco party. BO-EVENTI was created during the corona crisis. A number of peers and friends decided to organize a disco party. According to chairman Ann Cosyns, known as the owner of the confectionery shop ‘t Soete Gild, there are many people who want to make up for their losses after a time of silence during the corona crisis.

The venue is De Reep hall, which for the occasion is transformed into a real dancing from the late 1970s. For people who want to take it easy for a while, there is a lounge. ‘Coctails and drinks are served referring to this beautiful time. The members of the crew will lead by example and wear clothes from this period. The visitors can also dress in the clothes of the past, but I am certainly not obliged. The setting is provided by L & O Music and Lights and DJ James Brown provides the ambiance. Doors open at 8.30pm,” said Ann Cosyns.

On Saturday, August 19, 2023, Bo-Eventi will present an open-air music festival with several music groups from Geraardsberg, supplemented with a main act. We will communicate about this in due course, said chairman Ann Cosyns. Tickets for the disco party to come at the nr 0554/410 827 of [email protected]