Municipality of Horebeke is committed to sustainability, climate and energy

Over the past 2 years, the municipality of Horebeke has made a strong commitment to the climate and the consequences of climate change. In June last year, the River Contract for the Zwalmbeek catchment area was signed. Since then, efforts have been made to achieve a sustainable reduction of the flood risks in the Zwalmbeek catchment area. This is what alderman Hendrik Blommaert tells.

“September last year, the municipality signed the Local Energy and Climate Pact, which means that part of the climate plans and actions can be subsidized by 50% until 2030! The focus of this commitment is on greening, renovation and renewable energy, carbon-free shared mobility and drought issues. In collaboration with Hydroscan and Farys, the stormwater plan was completed and approved by the city council at the beginning of this year

This stormwater plan must provide a stepping stone to make the municipality’s water more robust, while striving to reduce the risk of flooding and drought. At the end of May, the 2021-2030 climate plan was submitted via the European Covenant of Mayors website.

The climate plan was drawn up by Zero Emission Solutions and Sumaqua, in collaboration with the Province of East Flanders. The municipality is committed to reducing CO2 emissions by at least 40% by 2030 compared to 2011. In addition, the municipality is committed to taking measures against flooding, drought, heat, erosion and loss of biodiversity.

More than 8 years ago, a master plan for Public Lighting was drawn up and

the public lighting is switched off between 10 pm and 6 am . These fire regimes were coordinated in mutual consultation with the neighboring municipalities

The following actions have already been carried out in the context of the River Contract Zwalmbeek:

Litter in the waterways and on the banks of the canals

At a municipal hotline ([email protected] residents can go with reports about all watercourses.

There will be an annual cross-municipal litter campaign with a focus on the waterways and their banks.

A cooperation agreement was concluded with SOLVA to partially appoint an enforcement officer. Inappropriate use of riverbank (zones) can be tackled as a result.

An urban planning regulation is drawn up in collaboration with the Province if one wants to discourage building in areas prone to flooding.

The VMM is investigating whether it is possible to expand the already existing flood control area near Meersestraat and Boekelbaan. In this way, flooding of homes along the Smarre will be significantly reduced.

In collaboration with Het Steunpunt Erosie, the construction of small-scale dams from nature-friendly materials and small-scale buffer basins in the catchment area of ​​the Peerdestokbeek is being stimulated. The municipality of Horebeke is committed to taking erosion measures in Kromstraat, Rokegem and Materstraat.” 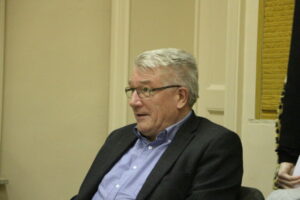