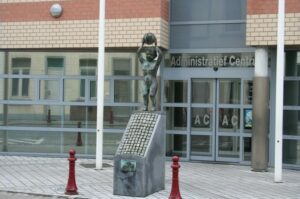 Geraardsbergen. On Thursday, September 22, the local government’s software was hit much harder by malware than originally indicated. The OCMW, the library… were also hacked. Councilor Bourlau wants to know how this was possible and what the consequences will be. “A ransom was demanded, but the city council did not respond to this blackmail,” said Veerle Mertens (CD&V) alderman of ICT. It is certain that the cost of the recovery will be high. The ships cannot provide a definitive answer as to whether sensitive information has been leaked.

Sensitive information
According to ships Veerle Mertens, it would be a targeted attack on the city and the OCMW. The procedure was started to limit the damage as much as possible. The necessary support was mobilized. The police, the public prosecutor’s office and other services were also involved. Investigations are currently ongoing and no additional information can be provided.

Councilor Stéphan Bourlau wanted to know whether the cause or source of this attack can be traced and whether the city’s software is sufficiently secured. Were personal details stolen from the residents of Geraardsbergen, such as national register numbers, PIN codes for ID cards? The foreman of Het Alternatief points out that the Population Service was also affected. Are the servers sufficiently secured and is there network segmentation? “I believe that citizens have a right to clarity, clarity and security with regard to our public services,” councilor Bourlau said in a response.

Ransom
According to Veerle Mertens, the city was extorted and ransom was demanded to release the blocked software. The hackers gained access to the software via an email ‘which appears to be from someone they know’. Within this e-mail they try to convince the user to open a file or visit a malicious website. ‘If the visitor does that, software from the hacker will be downloaded that will nestle in these files and can therefore also encrypt or steal data’. ‘It can take up to weeks, months before the developers have found the vulnerability of the software’, says Veerle Mertens. The recovery procedure is ongoing and will take some time.

Ships Veerle Mertens was unable to provide a definitive answer as to whether sensitive information had been leaked. The investigation should prove this. “Luckily, a limited number of computers and servers were impacted.” In addition, the costs can add up considerably. “This hacking is not covered by insurance,” the ships said.

Councilor Bourlau points out that the city has an obligation to inform citizens if sensitive information has been stolen. Schepen Mertens says that for the time being there is nothing to indicate that this is the case. “We’ll see this when the investigation is complete.”

Administrative Center hit by malware and unreachable until Monday