At the end of June of this year, the VoorZwalm faction (mayor Bruno Tuybens, aldermen Francia Neirinck and Patrick Moreels, city council chairman Tom Aelbrecht and councilors Emmy Herregodts, Anke Thuy, Greet Van Herpe, Nina Roest and Karel De Wagter) organized its annual He will benefita benefit (with fries) where the entire net profit is distributed to charities in Zwalm.

Last time the FOS scouts and the Chiro were supported, now it was the turn of the Zwalmse youth sports associations, next time we will go to social or environmental organisations, for example.

At the end of June, hundreds of people came to taste the delicious stew or veggie burgers. The net proceeds of this dinner party brought the nice sum of 3.700,20 euro which is divided among the youth activities of SK Munkzwalm, Kreadance, WIK Boekel and Machu Hapkido on the basis of the number of young people in Zwalm who are affiliated.

SK Munkzwalm logically received the highest amount, given the number of affiliated youth athletes. Marleen Denijs is very grateful for the support and indicates that the extra resources will be used to organize, in addition to the regular training sessions, extra technique training for the U7 to U9 and extra coordination training for the U10 to U13.

Dimitri Covent van creatively expressed that they were very charmed by this promotion and will use the extra money for the costumes and sound system for the annual mega show.

WIK Boekel will use the amount received for the renovation of the changing rooms, chairman Kurt Eeckhout said, while Karel Decatelle on behalf of Maruchi Hapkido reports that the money received will be used to finance the upcoming Hapkido internship in Zwalm. 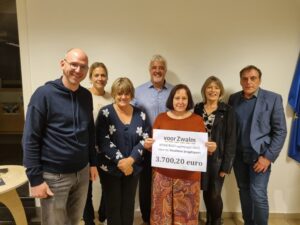