Wim Saeyens: “As an addition to our range, there is now the new Tirse beer, a dark blond gluten-free hoppy beer with fruity American hops (Mosaic, Cascade, Citra and Amarillo).

A second beer is the Strontketske. This is a smooth, pleasant, dark gluten-free beer with European hops and is in fact a winter beer that will taste slightly different every year.”

Earlier this year a competition was organized in which people were looking for an old or new photo of the alley Tirse.

This used to be a narrow alley, but now it has been completely renovated and converted into a parking lot.

The search for a photo for the beer label was not an easy task, so the brewery called in the help of the Brakelaars and local residents.

After selection, an old and a new photo remained.

The old photo of the alley was provided by Ludwig De Temmerman of the History and History Circle Triverius.

The photo was taken around 1980 by Paul Baguet, first secretary-treasurer and co-founder of GHK. Triverius.

The new photo for Tirse, a top view, was submitted by hobby drone photographer Christophe Hunninck.

Both winners were allowed to taste the new beers this evening and returned home with their first prize, 3 tubs of beer (both preferred the bottles instead of the equivalent barrel)

Both beers are present at the Bles Bierhappening in Zottegem

Geertrui Loman: “The beers are available on Saturday. already be tasted for the first time at the 28th national Bles Bierhappening in the banquet hall of the Bevegem ponds in Zottegem.”

Brewery De Graal is a Belgian craft brewery, located in Brakel. The brewery was founded in 2002 by Wim Saeyens, who followed a brewery training at the Rijksbrouwersschool. The company is responsible for the permanent production of six beers and also brews to order (from 500 litres). The brewery also exports to many countries. 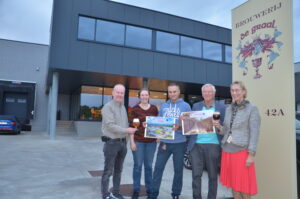 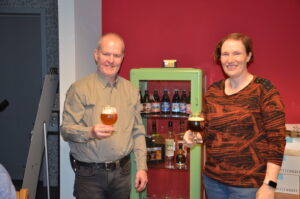