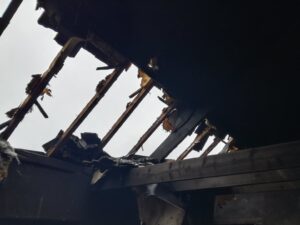 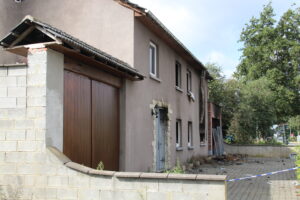 Schendelbeke/Onkerzele. In the night from Friday to Saturday, August 22, 2020, the rented house of Stephanie and Johan burned down completely in the Dagmoedstraat. The couple with five children ended up on the street, but thanks to the OCMW could end up in a transitional home. Two years later they are still living there. Due to a combination of circumstances, the family with five children is evicted from their home by a bailiff. Stephanie and Johan are looking for an affordable home, but currently have no solution. ‘If you have a proposal, you can call’, Stephanie says. 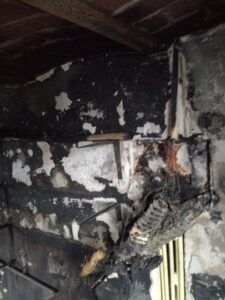 Stephanie and Johan have had a lot of setbacks in recent years. Their rental house burned down two years ago. The couple with five children ended up on the street. The family was able to live in a transitional home of the OCMW. Two years later, the family has to leave the house. Stephanie and Johan have to move their household effects before 9.15 am on Monday October 10, 2022 on the orders of a bailiff.

The family is looking for an affordable home for a large family. ‘I have been looking for weeks, but finding an affordable home for a family with five children is not easy’, Stephanie says. Even though Johan has a job, the family is not well off. We will be evicted on Monday. If we don’t find a solution, we risk ending up on the streets,” says Stephanie.

Fire Dagmoedstraat
In the night from Friday to Saturday, August 22, 2020, a house burned down completely in Dagmoedstraat. This dramatic incident left a family with five children on the street. A tragic story. ‘Suddenly I was on the street with my wife and children. We saw how the contents of our house literally went up in the Flames. The worst thing is that you can’t do anything, just watch helplessly,” said Johan Van Damme, a 51-year-old worker in a company on the industrial square. Johan and his wife Stephanie Beyer (41) have a newly formed family. Johan has two children from a previous relationship and Stephanie one. Together they have 2 more children.

“Nothing in the house could be recovered. All that’s left is some tools and a few machines that were in a pen at the back of the garden’, Johan said resignedly. The family had financial concerns and was unable to afford fire insurance for the household effects. Thanks to the OCMW, they were able to temporarily move into a transit house. The family could count on a lot of solidarity from the residents of Geraardsbergen.