After a fierce chase by Steven, the burglars come to a real fight 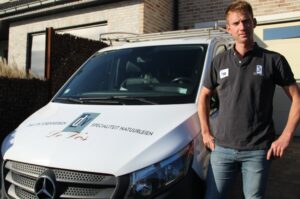 Geraardsbergen. Saturday morning, October 8, Steven DB wanted to get something out of his truck. He saw a car take off at high speed, which had been parked on the footpath in front of his driveway moments before. Steven noticed that the thieves had taken a lot of material from his car. He gave chase. A little later, the thieves got into a real fight.

He will not soon forget what Steven DB experienced last Saturday, October 8th. That morning he was up early to do another job. He wanted to get something out of his truck – which was parked in his driveway. “When I came out, I saw a car parked on the footpath near our driveway. The vehicle left very quickly for the Hoge Buizemont’, Steven testifies.

Chase and brawl
Steven thought this was very strange and took a look in his truck. Much to his dismay, he saw that it had been broken into and that some of the contents of the trunk had been taken. Steven didn’t hesitate for a minute, jumped into his truck and started the chase. In the Zavelstraat he saw the car of the burglars, who were breaking into another house in the meantime. It was a small white car with some green on it. “I immediately stopped and got out. The thieves were nowhere to be seen. I saw my work materials in their car, along with other materials that the thieves probably stole elsewhere,’ says Steven.

Just then, Steven saw the two thieves rushing toward him. “It was clear that they had bad intentions,” says Steven. It turned into a real fight. Steven dealt some serious blows, but could not prevent the duo eventually running away. During the brawl, Steven saw a van drive past and slow down. “But to my dismay, the driver didn’t stop to help me. On the contrary! He drove on full throttle.’

Steven didn’t give up and gave chase. In the meantime, he had informed the police. ‘I was able to chase the vehicle as far as Viane’s church. After that, the thieves were too quick and unfortunately I had to give up the chase’, Steven concludes. Presumably the car drove to the motorway and then to Brussels. Police have launched an investigation. It is not immediately clear whether there is a trace of the two thieves.

Dangerous game
Steven is quite impressed by the events, but remains very combative. During the uproar, he broke a little finger. ‘I also got a few blows, but I didn’t get anything out of it,’ says Steven. ‘In the meantime I have replayed the film in my head several times. Maybe I should have handled it a little better. But afterwards it’s all easier. During the tumult, it went so fast that I was more likely to run on adrenaline. Psychologically I’m back on top of it’, Steven concludes.

Steven realizes that it was a dangerous game what he played. ‘For the same money, the two burglars had a weapon with them…’. He is incompetent for two weeks of work, but still looks very fresh and sharp. The thieves steal 8,000 euros worth of work materials. “I hope the thieves are caught quickly and that they have to answer to the judge.”

Since the police investigation is still ongoing, we cannot provide details about the thieves and their car, but if you can provide additional information, please contact the Geraardsbergen/Lierde police: 054/43 04 30.