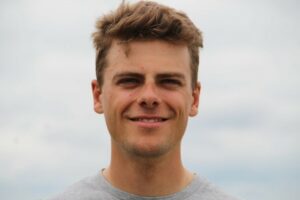 Vollezelle. Arne Marit has received the last bouquet of the Belgian cycling season. Coen Vermeltfoort seemed to be on his way to raise his arms for the Netherlands, but the Baloise Sport rider put a stop to that, even though Marit rode his last race for this team today. After an unlucky season with no fewer than seven falls in the spring, this victory was very pleasing. Before that, Arne Marit wrote the GP Raf Jonckhere on his palmares. Next season Arne will defend the colors of the Worldteam Intermarchè Wanty Goubert with Hilaire Van der Schueren as sports director.

Iljo Keisse also drove his very last race, but a final victory in the Closing Prize was not possible. Former Belgian champion Dries De Bondt played a leading role in this match by setting up a long breakaway with four teammates of Arne Marit. In the end, Arne Marit wrote his second season victory to his name.

For those who are interested: Saturday 19 November Arne Marit’s second support ball will take place in the SAYONARA room in Deftinge.

Arne Marit (23): ‘My wildest childhood dream is to conquer the green jersey in the Tour and win on the Champs Elysées.’

After a fierce chase by Steven, the burglars come to a real fight